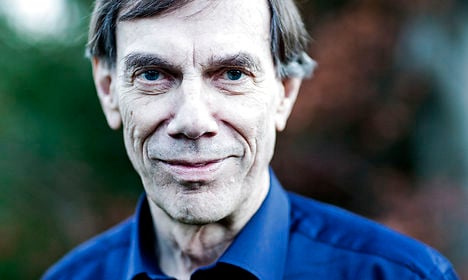 78-year-old Mogens Camre had a "strange feeling" when watching the news the other night. Photo: Betina Garcia/Scanpix
Danish People’s Party (DF) politician Mogens Camre, who over the summer got in hot water for a tweet comparing Muslims to Hitler, has once again come under fire for comments written on social media.
The 78-year-old Camre wrote a status update on Facebook over the weekend that struck many as racist.
“I had a strange feeling when I watched DR’s news broadcast here this evening. A journalist, who looks like he comes from the Middle East, interview an integration minister who is an Indian. They discussed how migrations can best fit into Denmark. Their indicators are conventions that are approved by people in foreign countries without Danes’ voices being heard. People from foreign countries decide what should happen with this country. The role of the Danes is to work and pay taxes,” Camre wrote in a now-deleted update. The internet never forgets: A screenshot of the now-deleted remarks.
Camre was referring to DR host Erkan Özden’s interview with the integration and equality minister, Manu Sareen.
Sareen took to Facebook himself to discuss the controversial comments.
“What’s up with him? Is there somebody out there who bothers to tell the man that we live in 2014!” he wrote on Saturday.
On Sunday, Sareen followed up with a tongue-in-cheek appeal for help.
“Help! Mogens Camre has sown the seeds of doubt in my mind: Am I Danish at all? And what is Danishness? I am therefore going on a search for my Danishness this week to convince myself and maybe also Mogens Camre,” Sareen wrote.
See also: Politician's Hitler tweet leads to police charge
Set in his place by party top
After standing by his controversial statement for a few days, Camre changed his tune after DF spokesman Søren Espersen attempted to distance the party from Camre’s remarks.
“I am astonished by Mogens Camre’s ethnic remarks. That kind of skin colour nonsense is something I simply don’t want to hear,” Espersen wrote on Twitter. Camre seemed to get the message and once again took to Facebook to insist that he “in no way judge[s] people on their race or ethnicity”.
“My status update on Friday evening has created a furore and I can see that the media is interpreting it in a way that wasn’t my intention and in a way that is detrimental to the Danish People’s Party. Allow me to therefore clarify that I in no way judge people on their race or ethnicity,” he wrote.
Camre added that he “takes back” his “incorrectly formulated” remarks.
A member of the Gladsaxe city council, Camre is no stranger to controversial statements. In addition to his July comment that “the Muslims are continuing where Hitler left off,” he also told a Dutch TV channel in 2009 that modern day Muslims in Denmark were a worse presence than occupying Nazis in World War II.
He also faced racism charges in 2003 for saying that all Western countries have been infiltrated by Muslims planning to take over, and in 2005 he was reported to police for blaming Denmark’s low birth rate on the “immigrant burden” and for saying that “immigrants in Denmark as a whole do not contribute anything at all to society.”