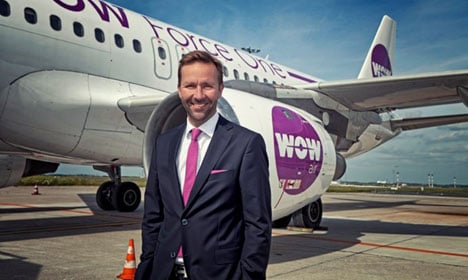 Wow Air's Skúli Mogensen said he wants to offer a total of six US destinations by 2016. Photo: Wow Air
As The Local reported on Wednesday, US citizens made up the largest group of Danish residence permit holders in 2013. Now, thanks to an Icelandic millionaire, all of those Americans will soon have new options for flying back home to the motherland.
Skúli Mogensen, the owner of Icelandic airline Wow Air, has announced that beginning in March 2015 his airline will offer flights from Copenhagen to Boston for just 699 kroner ($119) each way. In June, it will add a route from Copenhagen to Washington, DC.
See also: US citizens get 1 in 8 Danish residence permits
“You could of course say that it is ambitious, but we are experience rapid growth and expect to be up around 800,000 passengers already next year,” Mogensen told Berlingske Business.
But before Denmark-based travellers get too excited about a cheap flight over the Atlantic, a look at the fine print is in order because, as Mogensen himself said, customers will only get what they pay for.
“We are the first company to fly over the Atlantic to let customers just pay for what they want. That’s why we can keep prices so low,” he told Berlingske Business.
See also: Cheap flight tickets fail to curb SAS loses
That means everything, from luggage to a cup of coffee, is an add-on price. Each piece of luggage will add an additional 350 kroner, a baby carriage or sport equipment will add 325 kroner and selecting one’s seat will cost 15 kroner. No word on how much the coffee will cost.
Despite the add-ons, Mogensen said he’s confident that travellers will jump at his prices. He said he expects to reach one million passengers per year within the next two years and expects Wow Air to fly from Copenhagen to six different destinations in the US by 2016.
Tickets to Boston and Washington on the three-year-old Wow Air can be booked now.