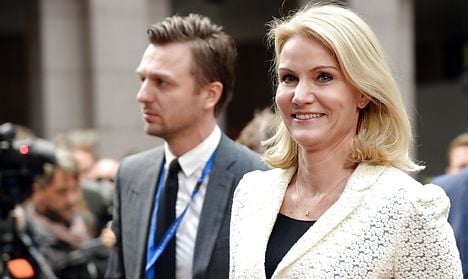 PM Helle Thorning-Schmidt had a little extra to smile about as she arrived on the second day of the European Union summit at the EU headquarters in Brussels on Friday. Photo: Theirry Charlier/Scanpix
Denmark is set to get 2.4 billion kroner ($406 million) back from the EU on December 1st, according to leaked EU documents which suggest that other European countries will have to make large top-up payments this year.
According to EU documents posted on UK news website The Financial Times, Denmark’s large rebate follows new calculations by the European Union, which take into account "adjustments" to countries' anticipated finances.
The Financial Times writes that that the EU has been trying a new way to calculate countries' gross domestic product (GDP), taking into account ‘hidden’ elements like prostitution and the illegal sale of drugs. The new calculation adjustments cover the period of 1995-2003.
"The Commission services are aware that in some cases this might have a significant budgetary impact in terms of cash-flow," reads the leaked document, which adds that the figures are "provisional estimates".
In Brussels on Friday, PM Helle Thorning-Schmidt stressed that nothing was final yet.
"These are technical adjustments and therefore at this point I won't get into whether there is money for one side or the other. It looks like Denmark will get money back, and then we'll take it from there," Thorning-Schmidt told the Ritzau news agency.
While Denmark will receive a sizable rebate, the UK by contrast is being asked to pay back €2.1 billion (15.6 billion kroner, $2.65 billion), as a result of its economy performing better than expected.
The Netherlands, Italy and Greece could also have to pay money back, with France and Germany due significant refunds.
That the UK will have to pay up to Brussels is a major blow for David Cameron as he tries to quell anti-Europe sentiment in his party and is preparing for a showdown with Brussels as he attempts to renegotiate the rules of the EU.
"It is not acceptable to just change the fees for previous years and recover funds on a moment's notice. The EU Commission has not been expecting this money and does not need this money, and we will work together with other countries facing a similar way to change this,” a senior British source working within the UK's Cabinet Office told the Financial Times.

EUROPE
How will the EU’s ‘Covid passports’ work for travellers?
Url copied to clipboard!