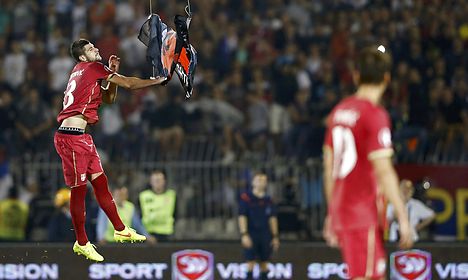 Serbia's Stefan Mitrovic grabbing the drone-carried nationalistic Albanian flag during the Balkan nations controversial Euro 2016 qualifier. Photo: Marko Djuric/Scanpix
When Serbia and Albania locked horns in Belgrade during their Euro 2016 qualifier earlier this month, fan misbehaviour ended the game prematurely. Now governing body Uefa has ruled that both teams will be punished with zero points from their encounter, leaving Denmark in the driver's seat of Group I despite suffering from a home loss to Portugal last week.
Additionally, Serbia will have to play its next two home games in front of an empty stadium, including the match against Denmark on November 14th.
Uefa is officially declaring the abandoned match as a 3-0 loss for Albania and also stripped Serbia of three points in the current qualifying competition. With the decision, Denmark now sits at the top of Group I with a total of four points.
The Serbia and Albania match was cancelled shortly after a drone flew over the pitch in Belgrade's Partizan Stadium flying a nationalistic flag depicting so-called Greater Albania. Serbia's Stefan Mitrovic grabbed the flag while it was still hanging in the air before clashing with Albanian players – scenes that rapidly spread to the remaining of the pitch and into the stands. It was the first time that Albania's national side visited Partizan Stadium since 1967.
This is not the first time that Denmark's national team has benefited from conflicts in the Balkans, as it was the Yugoslav Wars fought from 1991 that eventually led to Uefa's dismissal of the already Euro 1992-qualified Yugoslavia, leaving a spot open to non-qualified Denmark. Denmark was later crowned winners of the 1992 European Championship, beating Germany 2-1 in the final in Gothenburg, Sweden.