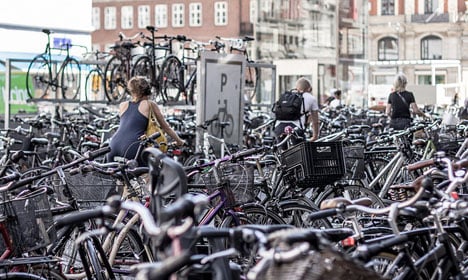 In most cases, once the bike is stolen it is gone forever. Photo: Alex Berger/Flickr
Denmark is widely seen as a cyclist’s paradise, but with all of those bikes comes a downside.
A new analysis from insurance company Alm. Brand shows that more than one out of every six people in Denmark have stolen a bicycle.
“There are many people who at one point in their youth have stolen a bicycle late at night to get home from a night out. And maybe they’ve stolen a bike that looked a little bit run down,” law professor Sten Schaumburg-Müller told Metroxpress.
According to Alm Brand, all of those stolen bikes result in Danish insurance companies paying out around 200 million kroner ($34.4 million) per year in compensation.
“I don’t think cycle thieves think about the consequences for the individual [bike owners] or for society. They probably just think that it’s merely a bike that can be easily replaced. But it’s not pocket change that our society is losing every day, and it is frustrating for those it affects,” Alm. Brand spokesman Mikael Sundby told Metroxpress.
It has been estimated that up to 200 bicycles get stolen every day in Denmark, but less than one of every 100 thefts actually results in criminal charges.
“Bike theft is something that is difficult to solve. But it’s also clear that if an area is consistently under-prioritised, that will have an effect on the magnitude of the problem,” Schamburg-Müller told Metroxpress.
Earlier this year, it was revealed that Copenhagen Police do not investigate thefts in which the value of stolen goods is less than 100,000 kroner. In 2013, a full 95 percent of all reported thefts were merely noted in a journal with no police follow-up.