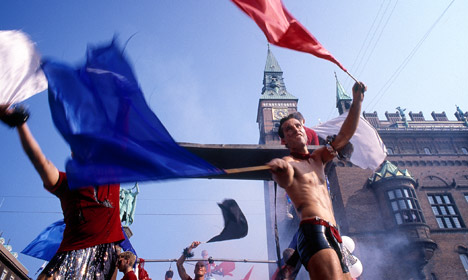 The Danish capital is the best destination for gay travellers. Photo: Christian Alsing/Copenhagen Media Center
There is no greater city in the world for homosexuals than Copenhagen, according to the venerable travel guide Lonely Planet.
In its rankings of the most gay-friendly destinations, Copenhagen takes the cake.
“One of the most tolerant and open communities in Europe, Copenhagen’s functional yet edgy fashion scene, brilliant array of cocktail bars, excellent range of gay-friendly boutique accommodation and packed calendar of queer events make it the gay-friendliest place on Earth,” Lonely Planet writes.
The travel guide points to the city’s recent decision to rename a public square in the shadow of City Hall (Københavns Rådhus) as Rainbow Square and touts Denmark’s historic legacy in promoting gay rights and acceptance.
“Denmark may be the home of Lego and at the forefront of New Nordic Cuisine, but importantly it made history in 1989 by becoming the first nation in the world to recognise registered same-sex partnerships. And at Denmark’s heart is the relaxed beauty of its compact cobblestoned capital, Copenhagen,” Lonely Planet writes.
Although Denmark didn’t legalise same-sex church marriages until July 2012 – becoming the eighth country in Europe and the eleventh worldwide to do so – the nation is still widely seen as a forerunner in liberal acceptance, as evidenced by the top spot in Lonely Planet’s new list.
And further cementing its status as the coolest place in town, the guide also encourages gay visitors to check out “the hip and super-cool district of Vesterbro, which also happens to be the city’s red-light district” as well as “Europe’s oldest openly gay bar, Centralhjørnet”.
See also: Vesterbro tops Nørrebro in the hipster war
Following Copenhagen on the gay-friendly destination list were New Zealand, Toronto and Palm Springs.
Lonely Planet’s top 10 gay-friendly destinations are:

Copenhagen’s crowning as “the gay-friendliest place on Earth” came on the same day as the the Global Green Economy Index revealed that the Danish capital is perceived as the greenest city in the world.