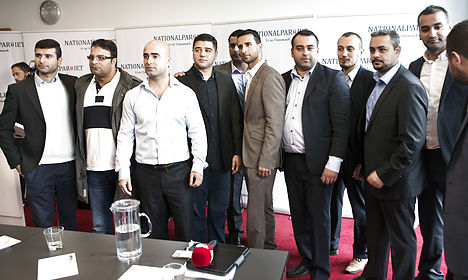 "We stand here more than 40 years after our parents arrived, still discussing whether this is where we belong." Photo: Linda Kastrup/Scanpix
A political party targeting the immigrant vote by advocating looser immigration laws and "a ban on banning" religious symbols has launched in Denmark amid record support for the populist right.
"The prevailing discourse has taken a marked shift to the right. We stand here more than 40 years after our parents arrived, still discussing whether this is where we belong," National Party (Nationalpartiet) leader Kashif Ahmad said at a press conference on Thursday.
With a logo sporting the Danish flag, the party claims "Danish values such as respect, tolerance and peaceful coexistence" had come "under attack" as more politicians adopt the rhetoric of the hugely successful rightwing Danish People's Party (DF).
"We are Danish. I feel in Danish, I think in Danish and I dream in Danish," said Ahmad, who is of Pakistani heritage and co-founded the organisation with his two brothers.
DF was one of the first anti-immigrant parties in Europe to enter the political mainstream as conservative governments in Denmark between 2001 and 2011 relied on its support in parliament in return for ever tighter rules on immigration. A shaky economic recovery helped it become the country's biggest party in this year's European election, gaining more than one in four votes.
"Every election since 2001 has been with foreigners as a central theme," said Ahmad.
"Through the years, many of the parties have gone in the same direction and with time it has become difficult to distinguish political statements from the right… and the left," he added.
"Unwanted guests"
Prime Minister Helle Thorning-Schmidt's Social Democratic party campaigned on a platform that included more humane immigration policies, but since taking power in 2011 her government has done little to roll back the restrictive rules imposed by DF.
Last month she said her government would introduce a new, temporary type of residence permit and delay family reunifications for asylum seekers fleeing civil wars such as the Syrian conflict after a steep rise in the number of applications.
See also: UN criticises Denmark's refugee restrictions
Leftist politicians also appear to have been influenced by the rhetoric of their opponents. A leading Social Democratic politician was this week quoted as saying that asylum seekers were "unwanted guests" in Denmark.
A lawmaker for the main opposition party, Venstre, in June suggested that immigrants be treated differently depending on whether they were "Christian Americans, or Swedes, or Muslim Somalis".
The National Party denied that its main constituency would be Danes of foreign descent, but in more than a nod to Denmark's immigrant communities, it has made abolishing the contentious "24-year rule" one of its six key issues. The rule prohibits foreign spouses from living in Denmark with their Danish partner util they have reached the age of 24. It was meant to reduce the
number of forced marriages, but critics say it violates international norms.
See also: Majority want stricter family reunification rules
Other planks include scrapping the so-called "connection requirement", which means family reunifications can only be granted if the family's "combined connection to Denmark is greater than their combined connection to another country". The National Party's leader Kashif Ahmad at Thursday's press conference. Photo: Linda Kastrup/Scanpix
The National Party also wants to ensure there are no restrictions on wearing religious symbols, such as the Muslim veil, in public, and says it wants to "look closer" at how the Palestine conflict could be resolved.
Neighbouring Sweden recently declared its intention to recognise a Palestinian state.
Ahmad said Denmark's modest birth rates meant a fall in the number of foreigners coming to the country could jeopardise its high living standards.
"Economic analysis shows that we will lack 250,000 [people in the workforce, ed.] if we want to maintain the same level of welfare as the Swedes have in 2030," he said.
To stand for the Danish parliament a political party has to collect about 20,000 signatures from the public, a target even well-known politicians have struggled to reach. The National Party claimed to already have 7,000.
Still, experts were doubtful the party would gain any seats in the next election, which has to be held by September next year.
Peter Nannestad, a political science professor at Aarhus University, said there were already parties that supported most of its policies, they just weren't among the more powerful players in parliament.
"The only possibility I see for the National Party is that they mobilise the many immigrants who so far haven't been voting," he told daily Berlingske.
"But even if they do, I doubt it's enough," he added.