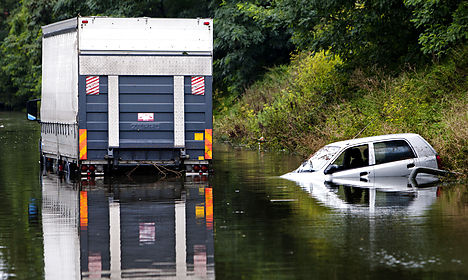 At least six vehicles and 15 homes were underwater on Thursday morning. File photo: Bax Lindhardt/Scanpix
According to area police, at least six vehicles have gotten stuck in flood water in northern Jutland, leading authorities to advise residents to avoid going out.
“I’ve never experienced anything like it. It is very rare that we get such huge amounts of rain in such a short time,” Knud Børge Møller of Hjørring Council told TV2 News.
Both Møller and the Danish Road Directorate (Vejdirektoratet) told residents to only travel by car if absolutely necessary, while police advised to display extreme caution while driving and to not drive in to standing water.
The flooding has also affected public transportation, with DSB announcing that it will stop running trains between Frederikshavn and Hjørring.
See also: Climate change will make Denmark hotter and wetter
Politiken reported that at least 15 houses in the Jutland town of Lendum were flooded as of Thursday morning.
Northern Jutland is expected to get pounded by rain for up to another 12 straight hours, with meteorology institute DMI predicting up to an additional 30mm. According to DMI, Lendum received 104mm of rain in a 24-hour period, while Uggerby received 74mm and Frederikshavn had 71mm. October's average total rainfall in the area is just 83mm for the entire month.
Emergency workers from southern Jutland were expected to travel north to help the situation.
A recent report from DMI warned that Denmark will be hit with more frequent flooding as a result of climate change.