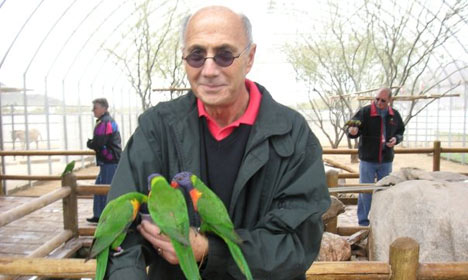 Carl Robinson had just recently retired when his cruise ship brought him to Copenhagen. Photo: Submitted
The cruise that took Carl Robinson to Copenhagen should have been the first of many holidays. The 63-year-old American had recently retired from his job as a school psychologist in the US city of Baltimore and could look forward to travelling and living the good life.
But instead, Copenhagen proved the last city Robinson would ever visit. He was struck and killed by runaway electric rubbish lorry while strolling down the pedestrian street Strøget on August 29th, 2012.
The lorry had been left unattended while a city sanitation worker emptied bins. The vehicle suddenly accelerated and struck the American tourist, who was dragged 20 metres under the truck before it collided with a wall. Robinson was killed instantly. Four other people struck by the vehicle escaped with minor injuries.
For Robinson’s family back home, the accident itself was hard enough to take. But what followed only compounded their pain, as they had to deal with city officials who they say were unresponsive to requests and generally unhelpful.
In December 2012, the City of Copenhagen and the driver of the vehicle were charged with negligent manslaughter and traffic violations – charges the city fought back against.
"It is clear that we have violated traffic laws and we are of course committed to ensuring that such a serious accident doesn't happen again. But we don't believe that there are sufficient grounds for the manslaughter charge,” Jens Elmelund, a spokesman for the city’s technical affairs department, said in a press release at the time.
In April 2014, the City Court of Copenhagen ruled that the city could not be held responsible for Robinson’s death. That ruling was appealed to the Eastern High Court, but on Monday  it too found the city not guilty on the manslaughter charges.
According to Ritzau, the Eastern High Court found the city guilty of violations of the Working Environment Act and handed out 45,000 kroner ($7,725) in fines for those violations and for the poor condition of the vehicle, which included an incorrectly working sensor that is supposed to disengage the motor when the driver’s seat is unoccupied.
The driver of the vehicle was found guilty of the negligent manslaughter charge and was fined a total of 5,000 kroner and had his driving licence suspended.
Robinson’s nephew, Jason Schoenfeld, said he found it more than a little bit curious that the city wasn’t held to account for purposely bypassing the safety switch. An investigation of the city’s fleet of 77 rubbish lorries found that seven, including the one that killed Robinson, had their safety mechanisms disabled.
“Nothing has been mentioned about how the city’s negligent actions of bypassing the safety switch caused this accident. Any way you consider the facts, if that switch were working, the vehicle would not have moved, even if the driver neglected to turn the vehicle off,” Schoenfeld told The Local.
Schoenfeld said his family does not place blame with the driver of the vehicle, but rather squarely with city officials.
“[City officials] have just used the driver as a scapegoat, overshadowing the city’s complete failure to have a safe vehicle on the road,” he said.
“They should be prosecuting the person in charge of the maintenance programme of these vehicles. Since seven vehicles had the safety switches bypassed, obviously they were doing this on purpose with complete knowledge of what they were doing,” Schoenfeld added.
Schoenfeld, whose family sued the city over the accident, said that two years after his uncle’s death he still doesn’t feel that justice has been done.
“This has never been about money, this has always been about recognising that the city’s neglect has cost a human life, and they should take responsibility for their mistakes. [City officials] have little concern that their poor decision-making cost someone their life,” he told The Local.
He said he hoped something good would ultimately come out of the fatal accident.
“I hope this never happens again. If one person’s life can be saved by us going through this, it would be worth it and my uncle would not just have been killed in vain,” he said.