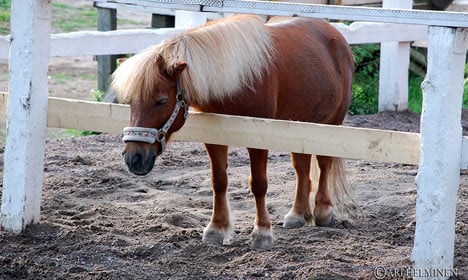 Tarzan (not pictured here) was the family pet of the man who killed it. Photo: Ari Helminen/Flickr
Two men were sentenced to 30 days in jail for beheading and disembowelling a pony on a public beach in the northern Zealand town of Tisvilde in July 2013.
The two young men, both in their 20s, filmed the pony’s killing and the video evidence was used against them in a Helsingør court on Tuesday.
A veterinary testified that the killing of the pony, a family pet named Tarzan, was particularly gruesome due to the use of a dull bread knife and the assailant’s amateur method of slitting the animal’s throat.
“If he would have cut further up, he would haven’t had to cut through so many muscles,” the veterinarian said in court according to Politiken.
The two men’s film showed the 25-year-old Carl Plum hit the pony in the head with a rubber mallet in a failed attempt to knock it out. Despite the pony still being conscious, the man then cut its throat with a bread knife as the animal struggled to get back on its feet. The man then cut the head completely off before removing the pony’s internal and sexual organs. The entire incident took place on a public beach in the wee hours before Sankt Hans Aften, Denmark’s midsummer celebration and was captured on film by Plum's 22-year-old accomplice.
The prosecutor in the case, Rikke Hald, called the pony’s death “painful and abominable”.
The pony’s death created a media scandal last summer, as one of the men involved is the son of celebrity chef Camilla Plum. She found the pony’s head in her garden and reported it to the police.
The young man previously tried to defend his actions by saying that he killed the pony to eat it in a Sankt Hans Aften meal.