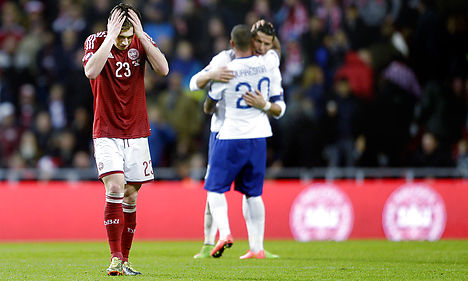 Pierre Emile Højbjerg is left in disbelief after Cristiano Ronaldo's late header gave Portugal the win. Photo: Liselotte Sabroe/Scanpix
Expectations were high at Copenhagen’s Parken on Tuesday night when Denmark took on Portugal in a qualifying match for the 2016 European Championship. The visitors fielded a strong line-up, led by superstar Cristiano Ronaldo, while Morten Olsen’s hosts abandoned its normal 4-3-3 lineup and instead took to the pitch in a 4-4-2 formation with Nicklas Bendtner and Lasse Vibe in front.
The match initially swung back and forth, but as the game progressed it was the Portuguese who came up with the biggest chances. Both Ronaldo and Nani tested goalkeeper Kasper Schmeichel, but the Danish ‘roligans’ were able to escape with nothing more than a scare.
At the 34-minute mark, the game saw its first real chance when Denmark's Michael Krohn-Dehli’s impressive play ended with a shot that hit the post. After that, neither club came close to scoring before the first half drew to a scoreless close.
For the second consecutive game, Olsen made a half time change. In Albania, he sent Vibe out to start the second half, but on Tuesday in Copenhagen he was benched in favour of Uffe Bech, who was given his first national game appearance in Parken.
The second half started with a huge change for Ronaldo. Luckily for Denmark, Schmeichel was ice cold in his dual with the superstar and took care of Ronaldo’s shot to the corner.
After this, the match became a more tactical affair with few chances for either team. It looked certain that it would end in a draw and one point to each team, but Ronaldo had other ideas. In the match’s dying seconds, he rose aloft to head in a cross from Quaresma and with that ruin the night for Denmark and the club’s 36,562 fans. Ronaldo expertly headed the ball past Schmeichel, securing Portugal the 1-0 win and three points.
The result left Denmark’s qualifying group wide open. The Danes will next travel to Serbia, whose Tuesday night game against Albania was cancelled due to crowd misbehaviour.