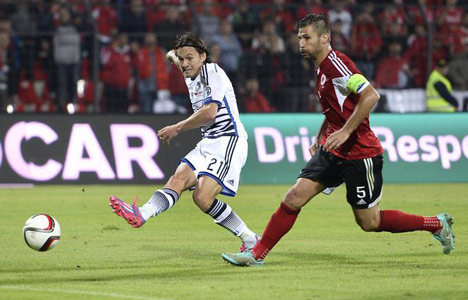 Lasse Vibe's late goal secured the tie. Photo: Lars Poulsen/POLFOTO
Denmark’s national team played to a 1-1 tie against Albania in a Euro 2016 qualifying match in Tirana on Saturday.
Albania, coming off of a 1-0 upset of Portugal in their opening game, looked like they would have the same result against the Danes after a shot by midfielder Ermir Lenjani in the 38th minute found its way past Danish goalkeeper Kasper Schmeichel.
However, a goal in the 81st minute by substitute Lasse Vibe equalised the match and secured national coach Morten Olsen’s club one point in their qualifying group.
The result puts Denmark at the top of its five-team group with four points, ahead of Albania on goal scored. In their first qualifier, Denmark topped Armenia 2-1.
“I’m satisfied with the result, but I’m not satisfied with the game even though it was a tough place to play,” Olsen told Kanal 5 after the match.
Denmark’s Nicklas Bendtner suffered a broken nose in the match, the 26-year-old striker told TV2 Sporten.
“After two minutes, I broke my nose and that made things go dark for me. I wasn’t able to play my best in the first half. During the break I took some pills, had the blood removed and had it treated and then the second half was a bit better,” he said.
The Danes will now return home to play Portugal, currently sitting at the bottom of the group, on Tuesday at Telia Parken in Copenhagen. Unlike in their lost against Albania however, this time Portugal will have the services of superstar Christano Ronaldo at their disposal.