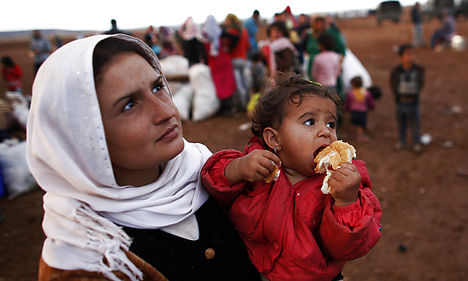 “It is unrealistic to believe that Denmark can isolate itself from what is happening globally," a UNHCR rep said. Photo: Murad Sezer/Scanpix
The United Nations Refugee Agency (UNHCR) has criticised Denmark’s newly-announced restrictions on family reunification for refugees.
The Danish government announced last month that refugees fleeing the civil wars like the one in Syria will be eligible for a new, one-year temporary residence permit. On Tuesday, the government followed that up by saying that only if a refugee has their permit extended beyond that first year can they bring their family members to Denmark.
See also: Denmark to limit family reunification for refugees
According to Pia Prutz Phiri, the UNHCR’s regional head in northern Europe, Denmark must realise that it has global responsibilities.
“It is unrealistic to believe that Denmark can isolate itself from what is happening globally. If there are conflicts and disasters, they are something that we must all take responsibility for,” Phiri told DR.
Phiri told DR that Denmark’s new restrictions come close to violating international laws.
“If we talk about Syrians – most of whom, we believe, are refugees under the international convention – and you don’t immediately give them family reunification, you are on the edge of international law,” Phiri said.
See also: New refugee proposal: Send them back
“Denmark must continue to fulfil its international responsibilities and recognise those who come to Denmark as refugees and see that they enter Danish society as soon as possible, and that also means that they should be united with their family as soon as possible,” she added.
Phiri told DR that the UNHCR wants to see all countries proactively provide family reunification options for refugees so that asylum seekers avoid dangerous escape routes to reach their ultimate destinations.
The UN estimates that there are currently more than 51 million refugees worldwide, the highest number since World War II. Denmark is expected to take in 20,000 refugees in 2014.
The UNHCR's criticism comes on the heels of proposals from opposition parties to stop accepting refugees in Denmark and instead send them back where they came from.