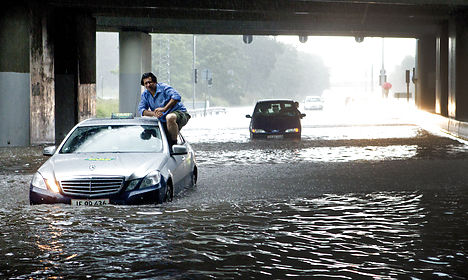 Denmark faces a future of both dry heat waves and extreme downpours if nothing is done about climate change. Photo: Bax Lindhardt/Scanpix
Denmark is in for much more extreme weather over the next century if the world fails to take serious action on climate change.
A new report from the Climate Ministry and meteorology institute DMI warns that Denmark will face more powerful storms, more heat waves, rising water levels and an average temperature that could rise by as much as 3.7C.
But it’s not just dire predictions about the future. Climate Minister Rasmus Helveg Petersen says the problems are already here.
“Climate change is happening here and now. In 2013 alone, Danish insurance companies paid out 2.3 billion kroner [$391 million, ed.]. There is no doubt that climate change will be very, very expensive for Denmark if we don’t do something drastic now,” Petersen said.
According to the report, the average temperature in Denmark will rise by 3.7C throughout the remainder of this century if the global levels of greenhouse gas emissions aren’t drastically decreased. The temperature increase will create fewer days with temperatures under the freezing point as well as more frequent and longer-lasting heat waves.
DMI also predicts that rainfall could increase by as much as seven percent over current levels, with extreme water levels that are currently seen only once every 100 years in Copenhagen occurring every second year. The rate of flooding is also predicted to double, leading to more scenes like the ones we saw on August 31st.
Helveg said that a binding agreement on emissions at next year’s climate conference in Paris is vital. If emissions can be be controlled, DMI’s model calls for an increase in temperature of just 1.2C by the end of the century and a 1.6 percent increase in yearly rainfall.
While the world waits to see if global leaders can have more success in Pair than they did at the 2009 climate talks in Copenhagen, Helveg called on everyone to do their small part.
“Even small actions count. Individual Danes can ride their bike to work, renovate their homes and make the right decisions for the climate at the supermarket. But we are dealing with a global problem that requires global action. As minister, I take responsibility for fighting for Denmark’s green revolution and for pushing other countries to enter a binding climate agreement in Paris in 2015,” he said.