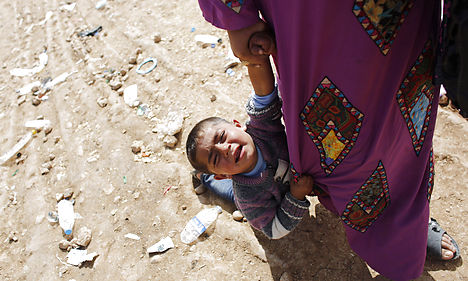 A Syrian Kurdish refugee walks with her child as they wait for transportation after crossing into Turkey. Photo: Murad Sezer/Scanpix
The right-wing Danish People’s Party (DF) and the libertarian party Liberal Alliance (LA) are calling for Denmark to stop accepting refugees and instead send them back where they came from and offer them help closer to home.
While LA’s leader, Anders Samuelsen, is trying to spin his party’s proposal by saying that more refugees could be helped in Danish-run refugee camps abroad than “the lucky ones” who make it to Denmark, DF was a bit more upfront about the goal of its suggestion.
DF spokesman Martin Henriksen told Politko that the party would like to see no refugees on Danish soil.
“I think that with one stroke, this would make Denmark incredibly uninteresting for asylum seekers and therefore believe that the asylum figures would plummet when they can’t receive a residence permit in Denmark,” DF spokesman Martin Henriksen said.
Henriksen suggested the establishment of Danish-run refugee camps in “an African country, a country in Asia or the Middle East”.
LA’s proposal calls for Denmark to stop accepting all refugees who are fleeing from wars and instead send them packing.
“Figuratively speaking, they should be turned around at the airport, put on a plane and sent to a refugee camp in the area of where they came from,” Samuelsen told Jyllands-Posten.
Opposition party Venstre, largely expected to take over governing power at the next election, stopped short of supporting the proposals but said they were “interesting”.
“In Venstre, we have for years thought that we should help more refugees in their communities, so therefore this is of course an interesting suggestion. My worry would be whether we could get the other countries to take on the responsibility, but it’s something we will look at,” Venstre spokeswoman Inger Støjberg told Politiko.
The ruling Social Democrats, however, flatly rejected the idea, calling DF’s plan “obscene”.
The two parties' proposals come after the government was forced to up its estimate on the number of refugees that Denmark will accept in 2014. The government now anticipates that around 20,000 people will seek asylum in Denmark, more than double its estimates from earlier in the year.