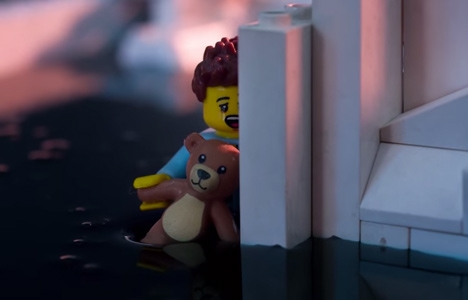 Greenpeace's video features Lego people and animals drowning in oil. Screenshot: Greenpeace/YouTube
In a true demonstration of the power of a viral video, Lego has decided it will not renew it collaboration with oil company Shell after a Greenpeace video about the partnership racked up nearly six million views.
In a statement, the Danish toy company echoed its message from July, saying that it was wrongly targeted in a dispute between Greenpeace and Shell.
See also: Video: Greenpeace tells Lego everything is NOT awesome
“As we have stated before, we firmly believe Greenpeace ought to have a direct conversation with Shell.The Lego brand, and everyone who enjoys creative play, should never have become part of Greenpeace’s dispute with Shell,” Jørgen Vig Knudstorp, the president and CEO of the Lego Group, said.
Knudstorp said that Lego does “not want to be part of Greenpeace’s campaign,” but made it clear that Lego would not renew its partnership with Shell.
“The long-term co-promotion contract we entered with Shell in 2011 delivers on the objective of bringing Lego bricks into the hands of many children, and we will honour it – as we would with any contract we enter. We continuously consider many different ways of how to deliver on our promise of bringing creative play to more children. We want to clarify that as things currently stand we will not renew the co-promotion contract with Shell when the present contract ends,” he said.
See also: Lego lays the bricks for Asian dominance
Greenpeace, which also assembled protest scenes with Lego figures at the Legoland amusement park in Billund, praised Lego’s decision.
“We are very happy that Lego has listened to the criticism and dropped its partnership with Shell. Lego normally displays a huge responsibility in the area of climate and environment, and it was unfathomable for me why they would choose to cooperate with one of the world’s worst climate offenders,” Birgitte Lesanner of Greenpeace Danmark said.
“Shell pushes aside considerations for safety, the environment and the climate to the side in its hunt for oil in the Arctic, which can have catastrophic consequences. Therefore it is an important step in the fight to protect the Arctic that Lego will now stop supporting Shell’s course of catastrophe,” Lesanner added.
See Greenpeace's video here, in which thousands of Lego bricks are slowly drowned in oil: