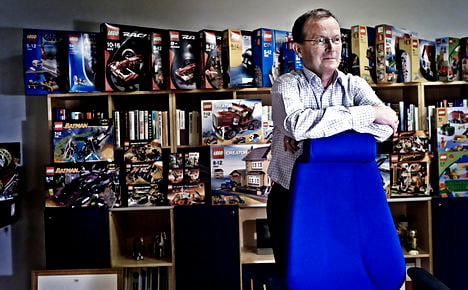 Lego heir Kjeld Kirk Kristiansen injected some of his own fortune into the company's turnaround. Photo: Claus Bjørn Larsen/Scanpix
Lego is making global domination look like child's play, as the world's biggest toy-maker puts the building blocks in place to lead rivals in Asia and buck an industry-wide revenue dip.
The Danish toys juggernaut overtook Mattel in the first half of the year. That was partly thanks to the runaway success of "The Lego Movie", which sent children scrambling for the coloured bricks, and partly because parents fell out of love with Mattel's Barbie, seen by some as promoting an unhealthy body image and outdated gender roles.
All in all, Lego seems to be having fun.
"They've done something similar to what Apple has done, which is known as transcending a category," said Niels Lunde, author of "The Miracle at Lego", a Danish book about the company.
"They don't just make toys, they make the stuff toys are made of. A Lego brick is not just a toy, it's an educational material that stimulates children's creativity," he added.
See also: Lego now the world's largest toy company
The children's market isn't always an easy game. More traditional toy sales face competition from an onslaught of video games and smartphone apps — many of which are free — leaving industry giants such as Hasbro and Mattel scrambling to come up with a digital strategy. Lego, arguably, has gone the other way.
In the 1990s, "they feared this primitive brick of plastic couldn't withstand the competition from the digital world," Lunde said.
They tried branching out into everything from video games to children's fashion, but this brought the group to the brink of bankruptcy, and in 2004 Lego heir Kjeld Kirk Kristiansen was forced to inject 800 million kroner ($135 million) of his own money.
Incoming chief executive Joergen Vig Knudstorp brought the company back to basics — bricks — but with the twist of earning licensing fees on things like Legoland theme parks, which were spun off and merged with Merlin Entertainment.
"Their turnaround came when they understood that this plastic brick is really a brilliant toy material," Lunde said.
By the first half of this year revenue had more than tripled since 2008.
"It is a very satisfactory result that shows our significant growth in recent years in a tough economic environment," Knudstorp said in a statement.
Differing fortunes
Meanwhile, at Mattel sales continued to fall — by 9.1 percent in the second quarter this year. Barbie sales have seen double-digit losses in four of the five past quarters and the California-based group has been unable to compensate for the shortfall through other dolls, like the horror movie-inspired Monster High range.
Feminist criticism of 55-year-old Barbie isn't the company's only headache — toddler toy-maker and Mattel subsidiary Fisher-Price posted a 17 percent sales drop in the period.
Perhaps the old adage of "if you can't beat them, join them" applies to Mattel's $366 million purchase in February of Canadian Lego-clone Mega Bloks. That may have been a wise choice as it prepares to face off with its Danish rival in the booming Chinese market.
"In China you have a nation of 'only' children and parents are willing to spend a lot," said James Button, consumer markets director at Shanghai-based consultancy SmithStreet.
"When you just have one child, parents aren't really sparing any expense," he added.
One difference with Western markets, however, is that Chinese parents are very focused on education, meaning toy-makers also compete for the time and money families spend on schools and extracurricular classes.
"Lego is going to play better with consumers because it does have some educational value," Button said.
Lego sales in China rose by more than 50 percent in the first half of this year and the company began building its first factory in the country. It also opened a Shanghai office as part of plans to make its management more international.
The Billund-based company continues to claim that digital devices cannot fully replicate the experience of playing with the bricks, likening it to the difference between playing football on a computer and on a pitch.
On the off-chance that preferences do change, the group isn't taking any chances. "We should see it before anybody else because we are at the frontier of the technology," Knudstorp said.
In August the company launched Lego Fusion, which blends real-world building with a smartphone app that interacts with the constructed models.
An online game launched in 2010, Lego Universe, also attempted to bring the real bricks into the digital era but flopped.
Still, the Internet is already changing how people play with Lego — it is one of the top three brands on YouTube, where fans enjoy posting video clips of their own, unique creations.