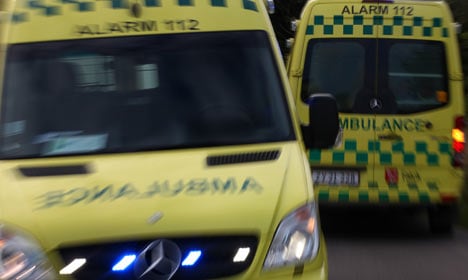 Region Hovedstaden has apologised for one of the incidences and says it will look into the other. Photo: Colourbox
Emergency services in the Copenhagen area are under scrutiny after two deaths within the past week in which dispatchers failed to send an ambulance in time.
On September 28th, a 12-year-old boy fell ill with extreme stomach pains in Amager. A passerby found the boy lying on the side of the road next to his scooter. The boy was in so much pain that he couldn’t even call his parents.
The woman who found him, freelance journalist Charlotte Geckler, consoled the boy while another passerby called for an ambulance. The caller was told by the Capital Region (Region Hovedstaden) control centre that what he was describing wasn’t serious enough to warrant an ambulance. The dispatcher told the caller to drive the boy to the hospital himself, even though he was a complete stranger. Shortly thereafter, a family in a passing car stopped by the scene and agreed to drive the 12-year-old to Amager Hospital. He was quickly transferred to Copenhagen’s Rigshospitalet, where he died two days later from a previously undiscovered cardiovascular illness.
Geckler told Politiken she was shocked by the dispatcher’s response.
“At first I was in a way relieved because I thought maybe it wasn’t so serious after all when a trained expert didn’t think there was a need for an ambulance. But at the same time I could just feel that it was totally crazy and when I sat the boy into the backseat of a car that had luckily pulled over, I became both angry and indignant that they wouldn’t send an ambulance to him,” she said.
“Can it really be right that there have been so many cutbacks that you can’t send an ambulance to a 12-year-old boy that has been felled by such powerful stomach pains that he can’t even call his mother?” Geckler added.
Man dies in front of a crowd at Metro station
Then on Monday, Region Hovedstaden ignored numerous pleas for an ambulance to come out to a 33-year-old homeless man who lay dying on the ground at Amagerbro Metro Station.
At least three calls to the Region Hovedstaden’s control centre were made within a half hour, but the dispatcher failed to send an ambulance until nearly 45 minutes after the initial call. At one point, the dispatcher offered to send Metro personnel.
“I told [emergency phone line] 112, which transferred me to a nurse that I thought that he was about to die, that he was unconscious and that I feared that he had stopped breathing. I wanted to have it confirmed that they would send an ambulance but was told that Metro people would be sent. So I asked if the Metro personnel could attend to him, if it was important that they came and if they would take responsibility if he died,” passerby Zerrin Hassan told TV2 News.
Hassan said only then was he told that an ambulance would come. By the time it arrived, the 33-year-old was dead. He died in front of a crowd of shocked and helpless onlookers.
Region Hovedstaden said that it will investigate the circumstances surrounding the 12-year-old boy’s death and issued an apology over its slow reaction in the death of the 33-year-old man.