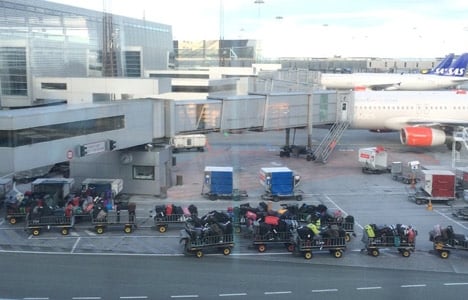 A photo from the baggage workers' June strike that was sent in by a traveller.
A short-lived strike by SAS baggage handlers will affect all of the airline’s flights at Copenhagen Airport throughout the rest of the day, SAS reports.
SAS press spokeswoman Trine Kromann-Mikkelsen told Ekstra Bladet that the baggage workers returned to the job at around 3pm, following a roughly 90-minute work stoppage. Their actions will affect flights throughout the remainder of Tuesday, she said.
"This will result in cancellations and long delays for the rest of the day. It is of course unacceptable for our customers," Kromann-Mikkelsen told Ekstra Bladet.
An airport spokesman told BT that other airlines should not be affected.
“SAS accounts for 40 percent of the traffic in the airport, but we are trying to run all other traffic as painlessly as possible,” Søren Hedegaard Nielsen told BT.
SAS Ground Handling held a similar strike in June. That strike grounded all traffic at the airport for nearly three hours, causing at least two cancellations and more than a dozen delays and leaving passengers fuming.