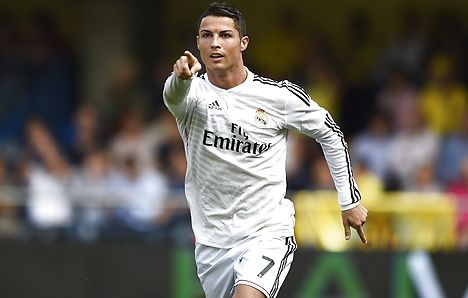 Real Madrid's Portuguese forward Cristiano Ronaldo celebrates after scoring during the Spanish league football match Villarreal CF vs Real Madrid CF on September 27th. Photo: Jose Jordan/Scanpix
Portuguese star Cristiano Ronaldo was on Friday called up by national coach Fernando Santos among his 24-man squad for the Euro 2016 qualifier against Denmark.
The Real Madrid striker's absense with a hamstring injury was felt during Portugal's Euro qualifying opener 1-0 defeat at home against Albania, which resulted in coach Paulo Bento losing his job.
Bento was replaced last month by Santos, 60, who lead Greece to the quarter-finals of the 2012 European Championship and the round of 16 in the World Cup in Brazil.
Ronaldo has recovered from his injury woes with the world player of the year scoring for Champions League holders Real Madrid in a 2-1 win over Ludogorets Razgrad in Sofia on Wednesday.
Denmark's clash against the Ronaldo-led Portugal will take place at Telia Parken stadium on October 14th. Before that, the Danes travel to Elbasan for an October 11th showdown with Albania.