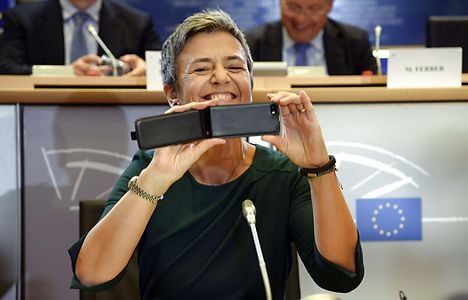 See what she saw below. Photo: Thierry Charlier/Scanpix
By all accounts, Denmark’s Margrethe Vestager on Thursday wowed a European Parliament that has been grilling some of her fellow new appointees to the EU Commission.
News agency Ritzau reports that the parliament’s ECON committee voted unanimously to approve Vestager as the new competition commissioner.
Vestager was praised for her relaxed demeanour during the three-hour hearing, which she started by turning the table on the wall of photographers taking her photo, writing ‘Now it begins…’

Under questioning, she munched on chocolate and even found the time to crack jokes, vowing to Belgian MEP Marc Tarabella that she would take it upon herself to personally investigate the quality of Belgian chocolates.
Vestager told Ritzau that she felt like the hearings went smoothly.
“I had thought that three hours is infinitely long, but it wasn’t. And I think I was very lucky because I received some very good questions where I had something to offer,” she said.
DR’s EU correspondent Ole Ryborg was at the hearing and said that Vestager’s performance was among the best received of all new commissioners.
“This was the 21st out of 27 commissioner hearings and the atmosphere was more positive than the others and several MEPs wrote on Twitter during the hearing that they were satisfied with Vestager’s answers,” he told DR.
The positive reaction was certainly noticed by Twitter user Pelle Christy:

Could MEPs possibly be more smitten with #vestager? One hour more and they'd all give her their bank cards & pin codes #EPhearings2014 2014

Vestager’s answers largely kept to broad strokes on topics such as the commission’s ongoing investigation of Google, saying only “I cannot say what the next steps will be, but I am sure there will be next steps.”
Euractiv’s report on Vestager’s hearing said that the former economy minister “tried and maybe failed to make her portfolio seem less technical and legal than it is, and closer to consumer issues”.
Once formally approved, Vestager will serve as the EU’s competition commissioner for the next five years.