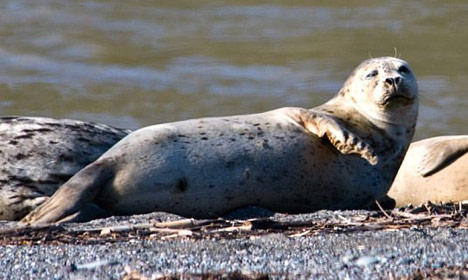 Photo: Tony Fischer/Flickr
The Fisheries and Maritime Museum in Esbjerg reported a large number of dead seals found over the past week and has sent samples to the Technical University of Denmark's National Veterinary Institute in Copenhagen.
The find raises concerns that the deaths could be related to the nearly 400 harbour seals that have been reported dead in western Sweden so far this year, ten times the typical annual average of 30 to 40.
It is understood that two of the animals in Sweden tested positive for a form of bird flu, but scientists say that the reason for most of the deaths remains unclear.
"So far we have not had a sufficient amount of samples in order to establish the causes of death," Siamak Zohari from the National Veterinary Institute told The Local Sweden.
Experts are particularly focused on seeing if the animals have contracted some kind of influenza. Two seals in Denmark are also known to have died from bird flu recently.
In 1988 a deadly virus known as PDV wiped out half of western Europe's seal population by attacking animals' immune systems. Between 17,000 and 20,000 seals died in just eight months. A similar epidemic followed in 2002.
"So far the animals that have been tested have not been shown to have PDV," Charlotte Moraeus from the Swedish Museum of Natural History in Stockholm told The Local Sweden.
In July, around 100 seals were found dead on the Danish island of Anholt over a span of two weeks.
Despite initial fears that the deaths were caused by a new PDV outbreak, researchers concluded that the seals died as a result of bacteria.