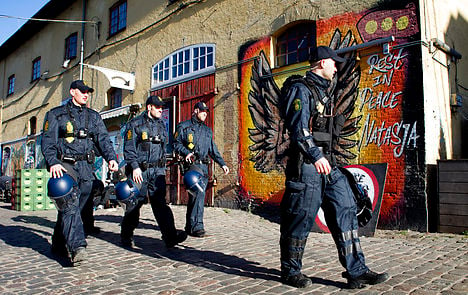 Danish police currently do not wear any form of identification. Police are seen here in a March 2014 raid of Christiania. Photo: Nils Meilvang/Scanpix
A working group made up of members of the National Police (Rigspolitet) and the Danish Police Union (Politiforbundet) has suggested an identification system that would see Danish police officers wear a unique number on their uniform.
The proposal comes more than three years after the Justice Ministry and police authorities began considering a police identification system.
Under the proposal, a code consisting of one letter and four numeric digits would be attached to the right side of officers’ chests. The group refrained from suggesting that officers wear name badges, saying that it was important “that the model would not mean an increased risk for individual police officers being exposed to harassment”, according to a Justice Ministry press release.
The plan also calls for officers to be able to change their identification numbers if they face harassment or a specific security threat.
There have long been calls for the implementation of a police identification system, owing to the fact that many complaints against the police are dropped because of difficulties in identifying the particular officers involved. This was most clearly demonstrated by a high-profile case in which an innocent cleaning man was wrongfully detained for hours during the COP15 climate talks in 2009. Despite a widely-circulated photo clearly showing the faces of several officers, the lack of ID numbers and officers’ unwillingness to disclose information resulted in an investigation into the police behaviour being dropped.
Justice Minister Karen Hækkerup said the proposed model struck a good balance between making officers easier to identify while not exposing them to risks.
“For me, it has been important that we find a model that ensures that residents can identify police officers easily, while at the same time not compromising officers’ safety. I think that the model the working group has presented looks very good,” she said.
See also: Political support for cameras on cops
Claus Oxfeldt, the chairman of the Police Union, said that despite police resistance to the original idea, he was satisfied with the proposal.
“It is hardly a secret that this was a set assignment and that the idea to implement an identification system was not grown in the union’s backyard. Seen in that light, I am satisfied with the proposal that we have reached,” he said.
The identification number proposal calls for the new system to be implemented over the next three to five years. Hækkerup said the Justice Ministry would now look at how to implement the group's recommendations.
In 2013, the Independent Police Complaints Authority (Den Uafhængige Politiklagemyndighed) took on 418 police complaints. In 58 percent of those, investigations were ceased due to a lack of evidence, often because the individual officers involved could not be identified.
Based on success in trials in the US and England, there have also been calls for Danish police to wear video cameras.
The implementation of a police identification system has also caused controversy in neighbouring Germany.