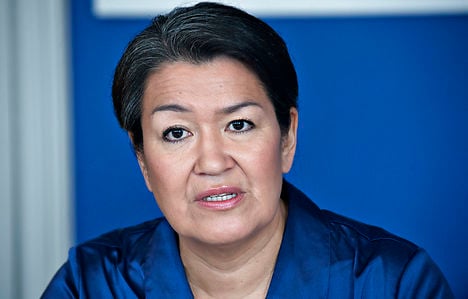 Aleqa Hammond is under investigation for the misuse of public funds. Photo: Jens Nørgaard Larsen/Scanpix
Greenland Prime Minister Aleqa Hammond has applied for temporary leave while she is being investigated over the misuse of public funds, the Sermitsiaq newspaper said on Tuesday.
"The request will be discussed in (parliament) after Aleqa Hammond has finished her opening speech," the speaker of Greenland's parliament, Lars-Emil Johansen, told the daily.
Greenland is largely self-governed, and its former colonial power Denmark maintains control only over foreign affairs and defence policy.
A report from the parliament's audit committee on Friday showed that Hammond had used 106,363 Danish kroner (14,289 euros, $18,130) to pay for airline tickets for herself and hotel costs for her family.
The Social Democratic leader only repaid the money this month despite being reminded several times since April last year.
Her predecessor, Kuupik Kleist of the separatist Inuit Ataqatigiit party, said he would leave his party after admitting to using 25,034 kroner of public funds to pay for his own expenses.
Hammond herself accused Kleist of corruption and cronyism in 2010 after an exploration license was granted to a private company with links to government ministers' family members.
Hammond won an overwhelming victory in Greenland's elections in March 2013 on a ticket of increased independence for the vast Arctic territory, which has a population of just 57,000.
Denmark currently provides 3.2 billion kroner a year in subsidies to Greenland under an autonomy agreement that gives the country full control of its natural resources.