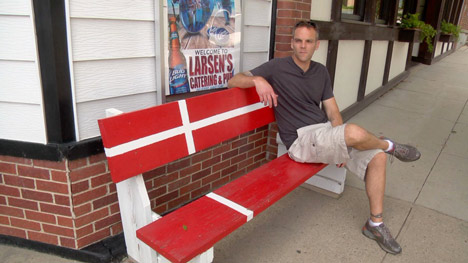 The Local's Justin Cremer returned to his home state of Iowa for this video report on Elk Horn. Photo: Shawn FitzGerald
On the western edge of the US state of Iowa, there is a hidden pocket of Denmark.
The town of Elk Horn is the epicentre of the largest rural Danish settlement in the United States. Founded by newly-arrived Danes in the early 20th century, over 100 years later, nearly half of the town’s 650 residents can still trace their heritage directly to Denmark.
For most of Elk Horn’s existence, its relationship with Denmark was largely one-way. While the town’s residents stridently maintained their Danish traditions, most people in Denmark were unaware of the Iowa town.
One can hardly blame them. I grew up in Iowa and was unaware of Elk Horn for most of my life. It wasn’t until I had married a Dane that those signs for a Danish windmill on Interstate 80 managed to catch my attention. My wife and I stopped off in Elk Horn for a nice afternoon once but didn’t think much more of the town until years later when, having moved back to Denmark, it was suddenly broadcast into our living room.
Two documentaries about the town were aired on national broadcaster DR to massive audiences. Nearly 650,000 viewers watched the first documentary, Danmark på prærien (Denmark on the Prairie), while the follow-up, Tilbage til Elk Horn (Back to Elk Horn), was seen by just under 600,000 Danes. Suddenly, seemingly everyone in Denmark knew about this small town in my home state.
In the summer of 2014 while home in Iowa for holiday, I decided to make another trip to Elk Horn to see if the town had changed since its newfound fame. I also caught up with the town’s mayor, Stan Jens, and the manager of the Danish Windmill Museum, Lisa Steen Riggs, when they visited Denmark in August 2014.
This time, I had a camera along. See my video report below.