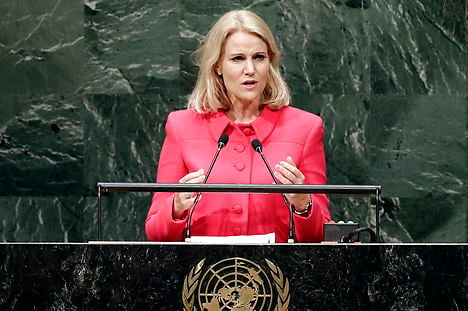 The PM's remarks focused largely on "the darker side of human nature". Photo: Jason Szenes/Scanpix
Danish prime minister Helle Thorning-Schmidt used her speech at the UN General Assembly in New York to focus largely on the threats facing the global community.
In her 20-minute speech, Thorning-Schmidt took on the rise of the Islamic State, the humanitarian crisis in Syria, Russian aggression in Ukraine, climate change and more.
The prime minister’s remarks started in a decidedly dark tone.
“Despite our aspirations to create a more just and peaceful world, atrocities continue to take place. Every day we witness expressions of the darker side of human nature,” she said.
“The challenges we face are complex. There are no simple solutions. What is required of us is strong collective international action to not only to manage the conflicts of today, but to prevent the crises and conflicts of tomorrow,” Thorning-Schmidt said.
The PM said the international community needed to act decisively against the “horrific and brutal terrorist organisation” the Islamic State, which Thorning-Schmidt addressed by its alternate name of ISIL.
“ISIL represent a distorted a political ideology that must be confronted, degraded and defeated by the entire international community, including of course countries in the region. Denmark will support the victims of ISIL’s atrocities. We take part in the human relief efforts in northern Iraq – of course we do. And we will continue our active contributions to the international effort to support Iraq in the fight against ISIL.”
With an outsized number of Danish citizens and residents having taken part in the fighting in Iraq and Syria, the PM added that it was “adamant to end the flow of foreign fighters and finances from the outside.” Thorning-Schmidt received a round of applause when addressing the situation in the Ukraine. Photo: Lucas Jackson/Scanpix
Applause for Russia criticism
She then turned her attention to the situation in Syria, calling Bashar al-Assad a “dictator who starves and bombs his own people”, before addressing the Russian aggression in Ukraine.
“The global community is based on international law. This law must be respected and not blatantly violated as we have seen this past year. We have witnessed an unacceptable foreign intervention in Ukraine. Fundamental principles of international sovereignty and non-interference have been disrespected,” she said.
“Throughout this conflict, Russia’s self-proclaimed support of the peace process has been in stark contrast to realities on the ground. We remain fully committed to a political solution that respects Ukraine’s territorial integrity and sovereignty,” Thorning-Schmidt said to a round of applause.
Thorning-Schmidt also used her time at the podium to announce Denmark’s increased contributions to the international efforts to contain the ebola virus.
“Ebola is not just a regional challenge. It has become a global crisis,” she said in announcing that Denmark would provide a ship for medical transport and additional funding to the WHO.
See also: Denmark steps up contributions in fight against ebola Prior to her appearance at the General Assembly, Thorning-Schmidt also addressed the UN Climate Summit. Photo: Lucas Jackson/Scanpix
Climate change affects everyone
On the subject of climate change, Thorning-Schmidt recalled a trip to Greenland with UN Secretary General Ban ki-Moon in which they witnessed the effects first-hand.
“Climate change is painfully visible in the Arctic. This is beyond discussion. And let there be no illusion that climate change will only have regional impact. No. The changes will affect each and every one of us on this planet,” she said.
Thorning-Schmidt called on the international community to reach a binding agreement on CO2 emissions in Paris next year and used Denmark as an example to dispel “fears that the green transition will limit economic growth”.
“The Danish economy has grown by 40 percent since 1990 while total emissions have decreased by 20 percent in that same period of time,” she said.
More work to be done
Finally, the Danish PM turned her attention to the need to come up with a post-2015 plan for the UN’s Millennium Development Goals.
“Over a 20-year period, from 1990-2010, 700 million people have been lifted out of extreme poverty. Child mortality has been reduced by almost 50 percent. Ninety percent of children in developing regions are now attending primary schools. This represents truly historic progress, but still we need to do more,” Thorning-Schmidt said.
You can hear Helle Thorning-Schmidt’s complete remarks here: