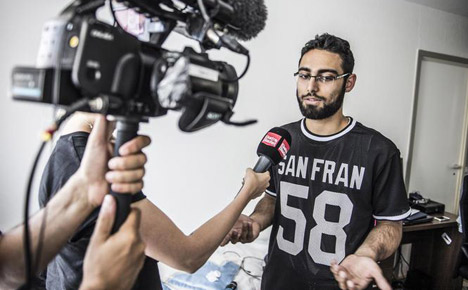 Ceran was the subject of both a police manhunt and extensive media attention. Photo: Jonas Olufson/POLFOTO
Remember Alisiv Ceran?
The 21-year-old University of Copenhagen student set off a city-wide manhunt involving police officers armed with automatic weapons last month after a fellow train passenger reported his ‘suspicious’ activity.
Despite the all-out response from the police, it turned out that Ceran was merely nervous about an upcoming exam and the book on terrorism he was reading that aroused his fellow passenger’s suspicion was actually the subject of his test.
See also: Nervous student causes manhunt in Copenhagen
While Ceran was able to laugh off the incident after the conclusion of the hours-long manhunt, he has now decided to sue the Copenhagen Police for damages.
Ceran is seeking 75,000 kroner ($13,000) and according to his lawyer will donate part of it to charity.
“The incident involving Alisiv Ceran is likely unprecedented in Denmark. The strength and extent to which my client completely unwilling became the subject of negative attention naturally allows him to be compensated,” the lawyer, Erbil Kaya, wrote in a press release.
Kaya said that despite his client’s cool-headed response in the immediate aftermath, he should have never been subjected to the manhunt to begin with.
“His pictures were published by virtually every media outlet and he was made an example out of in front of the entire population. He was deemed to be a potential terrorist,” Kaya said.
Kaya added that his client was the subject of “a fear that has crept in amongst the population” and that despite Ceran’s complete innocence, he has still faced a “smear campaign” on social media.
A police spokesman told DR that Ceran has every right to file a complaint and that it would be handled just like any other complaint against the police.