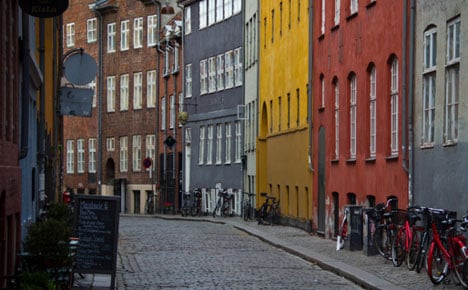 Scandinavian countries, particularly Sweden and Denmark, have a long tradition of painting the facades of their houses bright colours. These often change from building to building, creating a veritable rainbow of colour as one looks down the street. While this practice is somewhat common throughout Copenhagen, there are several prime examples hidden away along the city's historic back streets. While the most famous of these is Nyhavn – which can be found on nearly every postcard from Copenhagen – the rest are far more obscure. This list is intended as a local's insight to showcase locations you won't find in your average guide. However, I also ask that if you visit these locations, that you be extremely respectful and remember that these are residential areas. Please don't punish the residents for keeping the tradition of brightly coloured facades alive! Don't forget, you can follow my daily wanders on Instagram as @VirtualWayfarer.

1. Nyhavn
It is nearly impossible to visit Copenhagen without a stroll along Nyhavn. Though not as obscure as the other locations on this list, it is such an iconic spot that I can't help but include it. The area which now blends locals, tourists, and buskers in a churning mass of sunbathers, cafe-goers, and relaxed folks out for a stroll is home to one of the most iconic street views in all of Scandinavia. It is hard to believe that just 30 years ago the docks were overwhelmed by brothels, rough bars, and shady characters.

2. Amagergade
A five minute walk from the Christianshavn Metro Station, Amagergade is a tiny street that splinters off of Torvegade. While the ambiance of the street often suffers due to a number of parked cars, it is home to some of the oldest and most charming facades in the area. I've also been told by Danish friends that the street was featured in an old Danish TV series. With its lovely cobblestones, sagging wood frames, and multi-hued buildings it is easy to see why. If you're particularly lucky you'll also catch it in bloom when the road is lined by sagging flowers and lovely blooming roses. For those interested in refreshment and a truly authentic Danish bodega experience, seek out Kafe Falken just around the corner on Princessegade. It offers cheap beer, friendly (albeit a bit gruff) locals, and enough hanging smoke to make your eyes burn.

3. Magstræde
This lovely historic street is situated just off the canal that encircles Christiansborg Castle. It stretches from Rådhusstræd on the west to Knabrostræde on the east and is rumoured to be one of, if not THE oldest street in Copenhagen. The small lane oozes historic charm and character with its lazy bend at one end, old cobblestone paving stones, and lovely buildings. It is also narrow enough that it is easy to imagine old wagons bouncing over the stones on their way down to the docks. Many locals also like to frequent the cosy non-profit Cafe Retro, situated just around the corner on Knabrostræde.

4. Suensonsgade
This street, along with those to either side of it, are old military barracks sometimes referenced as Nyboder. The majority of the buildings date back to sometime between 1630 and 1795. They are painted a bright orange which often denotes military buildings in Denmark – but be careful – the paint is traditional and will stain your fingers or clothing a bright orange. Some of the buildings still serve as military housing while others have been converted for mixed use by the general public. While these buildings don't have the rainbow hues of the others mentioned on this list, they are equally impressive with a vibrant colour that sets them apart. If you enjoy these, consider heading into Kastellet itself to see the fortress' beautiful red buildings.

5. Sankt Pauls Gade
Along with the streets to either side, this street between Kronprinsessegade and Rigensgade is extremely charming. In addition to its multi-hued facades, it has a number of robust rose bushes which envelop many of the doorways and front yards during summer months. The vibrant colours of the roses combined with the hues of the buildings make for lovely photos.

6. Olufsvej
This is currently my favourite street in Copenhagen. While it is unfortunately paved with asphalt and not traditional cobblestones, it embodies all of the warmth, charm, and colour that one might expect to see in a larger-than-life fairy tale. Yet, with its plethora of richly coloured building facades, bikes, benches, and plants this street will melt your heart and leave you itching to race home with a bucket of paint in each hand. The street can be accessed via Øster Alle on the West and Østerbrogade on the East.

7. J. A. Schwartz Gade
While this street barely qualifies for this list due to the grey brick buildings which share the street with its more brightly coloured structures, what sets it apart are its rich vegetation and yard-gardens. Situated just off of one of Copenhagen's large city-lakes, the street has sacrificed most of its road and parking space for lovely front yards overflowing with green gardens. These gardens, though often looking slightly overgrown, are carefully taken care of and deliver a feast for the eyes during spring and summer when they explode with colourful blooms.

Why The Colour?
When I first toured Scandinavia I often found myself wondering – why go to all the effort of painting buildings bright colours? It seemed almost garish at the time, not to mention inefficient as keeping the paint jobs up becomes much more difficult. After surviving several Nordic winters, I've come to understand that as with the Danish obsession with candle light, these vibrantly painted buildings bring light to the city in the depths of winter. They lighten the mood while adding colour and vibrancy to what might otherwise be dark and dreary days. The result is an amazing difference in feel and ambiance when compared to other cities in areas like England where colour is underutilised or shunned.

Have a street that should have been included in the list? Let us know in the comments. Alex Berger is an American travel writer, photographer, and digital communications professional currently based in Copenhagen. He authors the popular travel and culture blog VirtualWayfarer while documenting daily life in Denmark on Instagram as @VirtualWayfarer and on flickr.