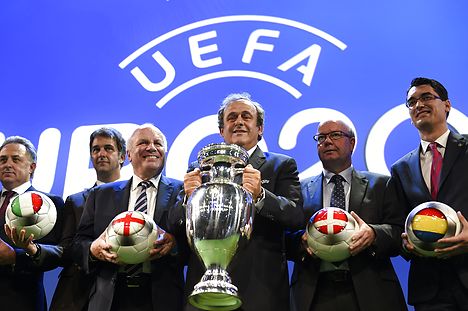 DBU's Jesper Møller (holding Danish ball) said "we look foward to showing our best to all of Europe". Photo: Fabrice Coffrini/Scanpix
Danish football fans will have plenty to look forward to at the European Championship in 2020 even if the national team doesn’t qualify.
Copenhagen on Friday was chosen as one of 13 host cities for the 2020 tournament. The newly-rechristened Telia Parken will host three group matches and a final 16 face-off.
Copenhagen was the only Scandinavian city selected as a host, much to the disappointment of Stockholm, which was one of six cities from a list of 19 to not get the nod.
“This is a fantastic day for Danish football, for Copenhagen and for all football fans in Denmark. We are proud that Uefa has shown us the trust to name us as co-hosts for one of the world’s largest sporting events. We look forward to showing our best to all of Europe,” Jesper Møller, the chairman of the Danish Football Association, said in a press release. The matches will be played in Telia Parken. Photo: Lars Møller/Scanpix
Copenhagen’s mayor, Frank Jensen, also welcomed Copenhagen’s selection.
“This is the first time ever that Denmark is among the hosts for an Euro elimination round and I look forward to welcoming Danes and the entire world to a huge football party in Copenhagen,” Jensen said.
London’s Wembley Stadium was chosen as the site of the semi-finals and finals. Baku, Munich, Rome and St Petersburg will host quarter-final matches while the other cities to host group games a final 16 are Amsterdam, Bilbao, Budapest, Brussels, Bucharest, Dublin, and Glasgow.