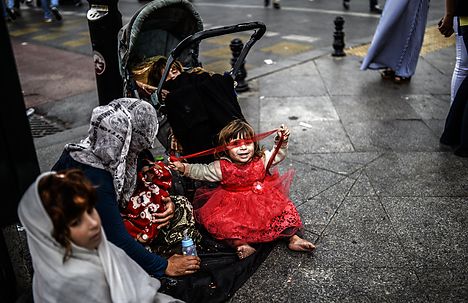 Around 2000 asylum seekers, mainly refugees escaping from the war in Syria, came to Denmark in August this year, TV2 News reports.

In September, around 100 to 140 new refugees have come to the country every day. The number may end up on 3000 asylum seekers by the end of the month.

According to the Immigration Service (Udlændingestyrelsen) we need to go back to the Bosnian War twenty years ago to find a similar influx of refugees.

Way more than expected
TV2 News reports that sources in the asylum system estimate the total number of 2014 to exceed 14,000 asylum seekers.

That’s way more than the Justice Ministry’s estimate earlier this year of 7,500 to 10,000 refugees.

Denmark took in nearly 4,000 refugees in 2013. Viewed in relation to total population, Denmark took in the fourth largest number of refugees last year amongst EU countries. For every million residents in Denmark, 694 refugees were accepted.

Housing struggles
Of the 3,889 Danish resident permits granted to refugees last year, over a third went to Syrians. The 1,382 Syrians given refugee status in Denmark represented by far the largest single group.

But the influx of refugees has led to housing problems, as many of the refugees are currently living in camping trailers, hotels and former care homes. Eight out of every ten municipalities is struggling with where to put the refugees.