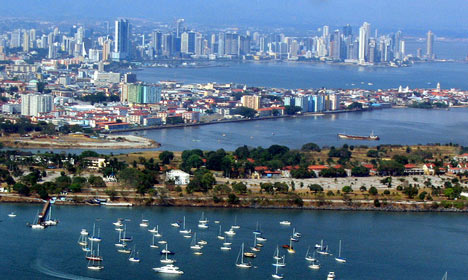 Panama: Happiest place on Earth. Photo: Dsasso/Flickr
In a new Gallup and Healthways Global poll, Denmark was ranked as the country with the third highest well-being overall and the highest in Europe.
Panama was the runaway winner in the scoring, which was based on self-reported elements of well-being in five categories: purpose, social, financial, community and physical.
The Central American country topped four of the five categories – bested only by Sweden in the category of financial well-being – and the 61 percent of Panamanians who thrive in three or more elements was well above runner-up Costa Rica at 44 percent.
See also: Danish happiness is all in the genes: study
Forty percent of Danes surveyed reported a high sense of well-being in at least three of the categories, with the country ranking third in financial well-being, fourth in physical well-being and fifth in purpose well-being. This was well above the global average of 17 percent and the European average of 21 percent.
The 45 percent of Danes who said they were thriving in purpose well-being, indicating satisfaction with their day-to-day lives, was the highest in Europe.
“Panama, Costa Rica, and Denmark are the only countries in the world in which at least 40 percent of residents are thriving in three or more elements of well-being,” the report reads.
Despite the obvious differences that spring to mind between the three countries – weather and landscapes, for starters – the researchers said there were several similarities.
“In Panama, Costa Rica, and Denmark, certain commonalities stand out. Each has a stable government and a highly educated population (school life expectancy of 12 to 15 years and literacy rates from 94 percent to 99 percent). All three countries also have positive or low negative migration rates, which may be related to their having stable or growing economies, political stability, relative safety, and access to basic services. Cultural attributes such as a high level of positivity may affect perceptions of well-being,” the results read.
“Social safety nets, whether provided by an official source (e.g., the government) or closer to home by families and/or communities, may also contribute to the exceptional levels of well-being in these countries,” it continues.
See also: The Danish happiness plot thickens
The report goes on to praise Denmark for its “efficient healthcare system, family-friendly workplace and education policies and a focus on gender equality”.
“Danish society is characterised by a well-rounded view of the requirements for a ‘good life’ and can, in many ways, serve as a model for other countries seeking to promote broad-based well-being for their residents,” it says.
Gallup and Healthways Global interviewed more than 133,000 people from 135 countries for the study, which can be accessed here.
The least thriving nations were Syria, Afghanistan and Haiti.
The study defined purpose as liking what one does each day, social well-being as having supportive relationships and love in one’s life and physical well-being as having good health and sufficient energy. It defined financial well-being as being able to manage one’s economic affairs without stress and community well-being as liking where one lives and feeling safe and taking pride in one’s community.
Denmark was named the happiest country in the world in the UN's World Happiness Report for 2013.