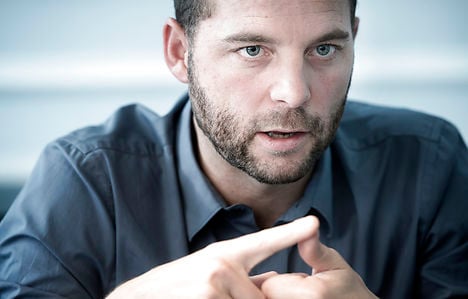 Heading into an election year, the Social Liberals' new leader Morten Østergaard has signalled a tougher immigration stance. Photo: Liselotte Sabroe/Scanpix
Since 2010, the social support costs of non-Western immigrants and their descendants have increased by over two billion kroner, while the same costs for ethnic Danes have decreased by eight million kroner, the think-tank and magazine Mandag Morgen has reported.
The magazine also found that since 2008, the number of non-Western immigrants and their descendants receiving financial support from the state has risen by 35 percent.
Government coalition partners the Social Liberals (Radikale), a traditionally pro-immigration party, said the numbers indicate that Denmark needs to start requiring more from immigrants.
“We need to admit that there are too many immigrants in the unemployment statistics and outside of the job market. There are too few in education and too many in the crime statistics,” the economy minister, Morten Østergaard, who is also the Social Liberals’ party leader, told Mandag Morgen.
Østergaard’s party cohort Marlene Borst Hansen also signalled a shift in immigration policies.
“We can see that there is a solid difference in how well different immigrants take care of themselves and how much they contribute to society. I don’t think that is due to resistance [on their part] but maybe we haven’t been clear enough about our demands and our expectations over the past few years,” she told Politiken.
Hansen ruled out taking any benefits away from immigrants or their descendants.
“We don’t think that the only way to get people to contribute is to take something away from them. We are of the opinion that we should have expectations and that people shouldn’t be allowed to go a long time without facing some requirements, as is in the case in many municipalities,” she said.
The new tone from the Social Liberals was foreshadowed by the party's Manu Sareen in an interview with Mandag Morgen last month.
"We need to begin setting the exact same requirements for everyone, regardless of skin colour and where they come from, so that everyone can reach a situation in which they can take care of themselves," Sareen, the integration minister, said.