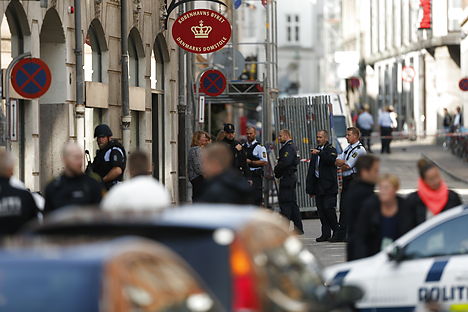 Heavily-armed police were on the scene after the shooting on Tuesday morning. Photo: Jens Astrup/Scanpix
A divorce and custody dispute was behind Tuesday’s dramatic shooting incident in a Copenhagen court that left one man dead and another critically injured.
The man shot dead was a 57-year-old lawyer involved in the case. His client, a 31-year-old man, was seriously injured, Copenhagen Police confirmed on Tuesday afternoon. The 31-year-old victim is the father of a three-year-old child at the heart of a dispute over visitation rights.
At a Tuesday afternoon press conference, Copenhagen Police spokesman Jens Møller Jensen also confirmed that the gunman was the 67-year-old grandfather of the child.
See also: One dead and one injured in Copenhagen shooting
“This is about the love of a child, which makes it extra terrible,” Søren Axelsen, a court representative told TV2.
The shooting took place inside a court (Fogedretten) that handles cases involving the enforcement of legal requirements such as debt payments, foreclosures and visitation rights. The court is located near Copenhagen’s Town Hall Square (Rådhuspladsen).
According to police, the mother in the visitation proceedings did not appear in court, instead sending her father to represent her. Her father brought a sawed-off rifle in a bag, pulled it out and shot both his daughter’s ex-partner and the lawyer. Police said earlier reports of a sawed-off shotgun were incorrect.
Møller Jensen said that a total of six shots were fired in the building, but he did not go into detail about how many shots hit each victim. The 31-year-old is reported as being in critical but stable condition at Copenhagen's Rigshospitalet.
According to DR, up to 15 people were taken to a psychologist following the shooting.
Jørgen Holst, the chairman of the Danish Bar and Law Society (Advokatrådet) told DR that he's not aware of any lawyer being killed while on the job in recent Danish history. He said that in light of Tuesday's incident, security measures may have to be reconsidered.
"Every violent development of course brings with it the opportunity to consider whether or not the system has the right balance between Danish traditions and openness and control and police and so on. It's difficult to say where to draw the line. But a case like this gives one occasion to consider it again," he said.