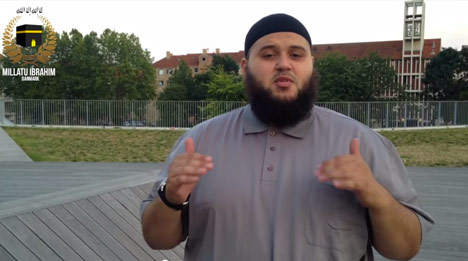 Screenshot: YouTube/Millatu Ibrahim Danmark
The jihadist organisation Millatu Ibrahim, which is banned in neighbouring Germany, has established itself in Denmark.
Ekstra Bladet reported on Sunday that the group’s members include some of Denmark’s most radical Islamists and takes its inspiration from the Islamic State, the terrorist organisation alternately known as Isis. According to the newspaper, several of the group’s members have fought in Syria and Iraq.
Millatu Ibrahim posted its first Danish video to YouTube last week, filmed in Aarhus’s Gjellerupparken. The video (see it below) features a man wearing a taqiyah, an Islamic rounded cap, and sporting a long beard. The man speaks both Arabic and Danish in the video.
The Islamist praises both Isis leader Abu Bakr al-Baghdadi and former Al-Qaeda leader Abu Musab al-Zarqawi, who was killed by the United State in 2006. The man also condemns Danish democracy and those Danish Muslims who support it.
“We condemn those who worship democracy. We condemn them for eternity,” the man says.
According to Ekstra Bladet, the Danish branch of Millatu Ibrahim was established in Vejle and also includes known Islamists from Copenhagen, Aarhus, Odense and Aalborg.
Nico Prucha, a jihadist expert at the University of Vienna’s Asutrain Institute for International Affairs, told the newspaper that “there is a strong connection between Millatu Ibrahim and the Islamic State.”
“Many followers of Millatu are full-blooded members of the Islamic State and fight in the Middle East for their caliphate. Millatu Ibrahim is a part of the European Islamist network, which has connections in Austria, Germany, Belgium, France and the UK so I’m not at all surprised that they’ve now shown up in Denmark,” he said.
Millatu Ibrahim is a Salafist organisation that was banned by the German government in June 2012. The group was the subject of massive police raids in Germany in June 2012 and March 2013. A former German rapper who performed under the name Deso Dogg was thought to have been a driving force behind the group’s German presence.
Millatu Ibrahim's Danish video can be seen below.