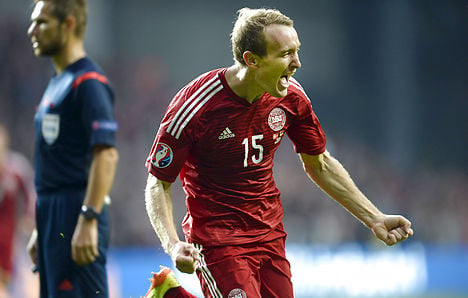 Thomas Kahlenberg celebrates his goal that put the Danes up 2-1. Photo: Claus Bech/Scanpix
Denmark topped Armenia 2-1 in the opening qualifier for Euro 2016 on Sunday.
After a scoreless first half, Armenia pulled in front in the second, leading the home crowd of 20,141 to fear that the Danes would once again fall to the Armenians, who embarrassed Morten Olsen’s club 4-0 in a World Cup qualifier last year.
But a smashing drive from 19-year-old Bayern München midfielder Pierre Emile Højbjerg evened the score in the 65th minute.
With ten minutes to go, a pass from Nicklas Bendtner found substitute Thomas Kahlenberg, who knocked in a header to put the Danes up for good.
To qualify for the European Championships held in France next summer, Denmark needs to finish among the top two of Group I, which in addition to Armenia includes Portugal, Serbia and Albania.
The Danes’ next qualifier will be on October 11th in Albania.