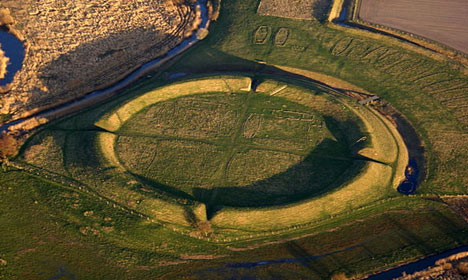 Trelleborg in western Zealand. Photo: Thue C. Leibrandt/Wikimedia Commons
Researchers have made a Viking discovery that is truly one for the history books.
Just west of the Zealand town of Køge, archaeologists have uncovered a circular Viking fortress – the first such discovery in 60 years. The new find shakes up popular knowledge of the Viking Age, as researchers had assumed that the four previously discovered Viking fortresses were all that remained in Denmark.
“This is big news! We share the Viking era with other countries, but these ring fortresses are unique to Denmark and many had given up hope that there were more remaining,” Viking Age historian Lasse Sonne from the University of Copenhagen’s Saxo Institute told Politiken.
See also: 'Ritual destruction' of Iron Age warriors found
Archaeologists have thus far uncovered just small portions of the new fortress, which is being dubbed Vallø Borgring. Researchers have not yet definitively dated the fortress, but think that, like the previously-discovered ring fortresses – Aggersborg and Fyrkat in northern Jutland, Trelleborg in western Zealand and Nonnebakken near Odense – it likely dates back to over a thousand years ago when Harald Bluetooth ruled as king from 958 until his death in 985 or 986.
The newly-found fortress has a diameter of 145 metres, making it the third largest of the five discovered in Denmark.