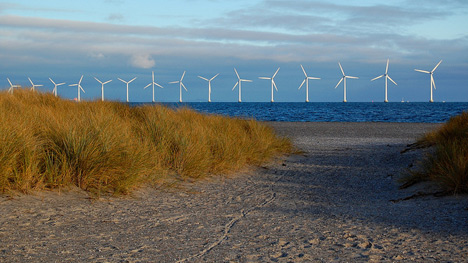 Photo: SirPecanGum/Flickr
Wind power accounted for 41.2 percent of all electricity used in Denmark during the first half of 2014, a record proportion according to the state-owned Energinet.
Energinet’s figures also show that January set a single-month record, with wind energy amounting to 61.7 percent of total electricity use.
“It is going tremendously fast with wind development,” Lars Aagaard, the CEO of the Danish Energy Association (Dansk Energi) told Politiken.
Aagard said that the challenge is to harness the wind energy so that supply and demand always match.
“Wind development shoots itself in the foot in the sense that the rapid expansion makes the price of electricity drop drastically at times. Therefore, we need to look at both how we can control consumption smarter and how we can use more electricity for warming our homes and for electric cars, for example,” he said.
The Danish government has set the goal of having half of all electricity produced by wind power by 2020.
While the wind power accounted for over 40 percent of Denmark’s electricity, it only covered roughly five percent of the nation’s total energy use. According to the Danish Energy Association, electricity only makes up one tenth of Denmark’s total energy usage. The use of fossil fuels like oil, coal and natural gas covered three fourths of Denmark’s total energy use in 2013.