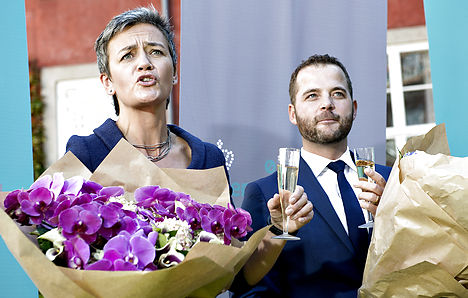 Margrethe Vestager celebrated the hand-over of the economy and interior minister post to Morten Østergaard, but she might not be celebrating her EU Commission appointment. Photo: Keld Navntoft/Scanpix
When PM Helle Thorning-Schmidt appointed Margrethe Vestager to the European Commission, she said it was to ensure a “heavy position” for Denmark within Jean-Claude Juncker’s new team.
Most assumptions were that Vestager, as Denmark’s departing minister for the economy and the interior, would get an economic post, with rumored possibilities including the commissioner for trade, energy or the internal market.
But according to a draft prepared by Juncker’s team and obtained by Euractiv, Vestager will be appointed as the environment commissioner.
According to Euractiv’s report – which stresses that the document it has seen “is clearly not a final version and subject to change” – the internal market portfolio will disappear under Juncker’s leadership. In the other two posts rumored for Vestager, Germany’s Günther Oettinger is expected to be named the trade minister, while the UK’s Jonathan Hill is tapped as the energy and climate change minister.
“I would be very surprised if this turns out to be true, but if it is correct, it is obviously a letdown for both Vestager and Denmark. No matter how they might try to position it, the environment commissioner is one of the lower positions in the European Commission,” David Trads, a political commentator for TV2 News, told The Local.
“Based on the signals sent by both the prime minister and Vestager herself, this is not the type of position they had in mind,” he added.
Euractiv characterised Vestager’s apparent appointment as environment commissioner as a “logical choice”. If the report holds true, Vestager would take over the environment portfolio from Greece’s Stavros Dimas.

Euractiv’s senior editor, Georgi Gotev, wrote on his blog that he was given the leaked document “by a strange individual”.
“Is it a scoop? No, I was leaked, probably not by Juncker himself, who must be furious. But papers circulate and maybe some insiders wanted it that way, to test the water,” he wrote.
Juncker is expected to formally announce his commission next week. Euractiv's projected commission make-up can be viewed here.