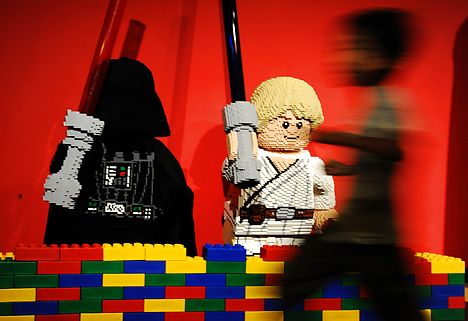 A boy runs in front of Lego-made Darth Vader and Luke Skywalker at LegoLand in Tokyo. Photo: Rie Ishii/Scanpix
Danish toy maker Lego has taken the top spot as the world's biggest maker of toys by sales, overtaking Barbie doll-maker Mattel, its first-half results showed on Thursday.
First-half sales rose 11.0 percent to 11.5 billion kroner (1.55 billion euros, $2.03 billion).
Performance was boosted by the Lego Movie product line which was launched together with the group's eponymous feature film earlier this year.
"It is too early to say if the strong performance will be reflected in the full year results," chief financial officer John Goodwin said in a statement.
"The majority of Lego sales to consumers happen in the second half of the calendar year in a short time span of a few weeks leading up to the holiday season," he said.
Net profit rose 14 percent to 2.7 billion kroner, also putting it ahead of Mattel, which reported disappointing first-half results in July as sales of Barbie continued to decline.
Mattel bought Canadian Lego rival Mega Brands — which makes plastic building blocks directly in competition with the Danish group's products — for $460 million in February.
Lego is looking to grow in Asia, where sales are relatively small compared to sales in the mature markets of Europe and North America.
"China saw the most significant growth in consumer sales in the region by more than 50 percent," the company said.