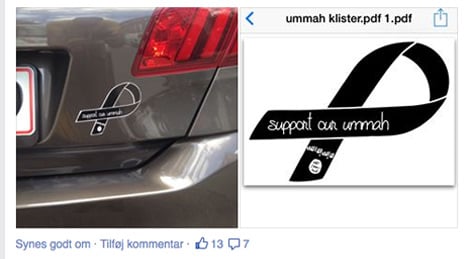 A screenshot captured by Syrienblog shows the stickers being sold on Facebook. Photo: Syrienblog.dk
Copenhagen Police arrested three people on Wednesday for the sale of stickers bearing the logo of the Islamic State, the terrorist organisation previously known as Isis.
Police raided four addresses in Copenhagen based on the suspicion that the sale of the Isis stickers is being used to directly support the militants. Police said that they received several reports about the stickers throughout August.
The Isis stickers were first exposed over the summer by the website syrienblog.dk, a site dedicated to outing suspected Danish jihadists.
See also: Danish mosque expresses support for Isis
The stickers were being sold for 50 kroner ($8.85) by the association De Humanitære Hjerter (Humanitarian Hearts) and the association’s chairman was among those arrested on Wednesday. According to Danmarks Radio, the other two arrestees are also associated with the association.
The stickers mimic the design of the popular ‘Support Our Troops’ stickers, but the ribbons are black rather than yellow and bear the Isis logo along with the text ‘Support Our Ummah’, Arabic for ’nation’ or ‘community’.
"Copenhagen Police has made an assessment in the case. We feel there is a reasonable suspicion that there may be support for a terror organisation and thus a violation of Article 114B of the Danish Penal Code," deputy inspector Jens Møller Jensen said in a press release.
The association’s chairman has previously claimed that he was unaware that the stickers used Isis’s logo and has publicly denied raising money for the jihadist group, which on Tuesday released a video showing the beheading of American journalist Steven Sotloff, the second such video in two weeks.
In addition to the chairman, identified by the police as 'AD', a 35-year-old man born in Libya, the other two arrestees were a 30-year-old female Danish citizen with a Lebanese background and a 51-year-old Danish woman. They could face up to ten years in prison if convicted. Police said that their raids turned up money and documentation of the stickers' sale but not the stickers themselves.
The police action on Wednesday came in the wake of an Aarhus mosque openly expressing its support of Isis.