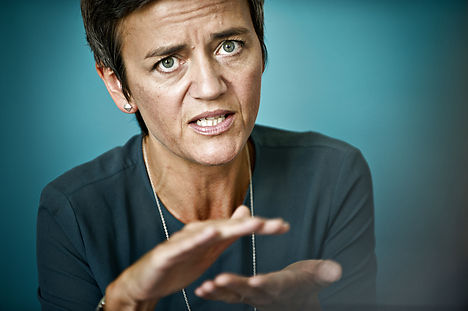 Economy and Interior Minister Margrethe Vestager will leave the government in favour of a spot on the EU Commission. Photo: Torkil Adsersen/Scanpix
PM Helle Thorning-Schmidt may not have been appointed the European Council president on Saturday, but her trip to Brussels has nonetheless led to a major shake-up in domestic politics.
Margrethe Vestager, the minister for the economy and the interior, has been appointed Denmark’s new EU Commissioner. The political leader of the Social Liberals (Radikale) will say good-bye to Christiansborg and hello to what Denmark hopes will be an influential post on the commission.
See also: Thorning: Tusk the right pick for EU top job
Thorning-Schmidt said at a press conference following Saturday night’s EU top meeting that she has appointed Vestager with the clear expectation that it will give Denmark a powerful voice within the EU.
“I will miss Margrethe, whom I have had a good working relationship with. But this is what we must do in order to ensure that Denmark gets a heavy position in the new commission,” the PM said.
It is unclear which position Vestager will receive in Jean-Claude Juncker’s EU Commission, but Thorning-Schmidt said that she was sure “it will be a position that corresponds with her experience and political qualifications”.
According to TV2, rumoured possibilities for Vestager include being named the commissioner for trade, energy or the inner market. Some media analysts were predicting that Vestager could become the most influential Dane on the Commission since Henning Christophersen's 1985-1995 tenure.
Vestager’s exit will mean that Thorning-Schmidt will need to find a new economy and interior minister. A ministerial shake-up is expected to be announced in the coming days.
On Sunday afternoon, it was announced that current Tax Minister Morten Østergaard would replace Vestager as both the minister for the economy and interior and as Radikale's party leader.
Vestager said she was excited about the move and felt fine about what she will leave behind.
“I have chosen to become commissioner because it is something that I think I can do well. And Radikale is in a super position. There has been a marked generational change and there is a great team that is ready to go,” she told Politiken.
Vestager has been a key player in Denmark’s centre-left coalition government since it took power in 2011. Her outsized influence on the government’s policies at times left political observers wondering just who truly was the coalition leader.
With her exit, Thorning-Schmidt will have to once again shake up her cabinet. No fewer than 15 ministers have left their post under her leadership.
The PM, who can now finally stop dealing with constant speculation about her own future, will get a chance to rejuvenate her government and build a team that she hopes will lead to reelection. Thorning-Schmidt needs to call for a new parliamentary election by September 2015.