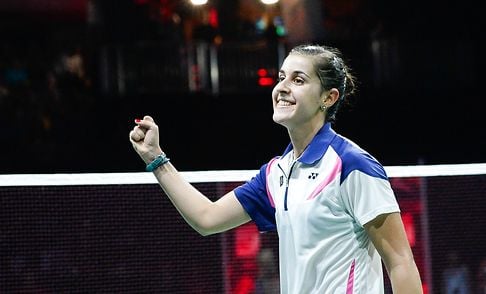 Spain's Carolina Marin topped China's Li Xuerui (not in picture) in the women's single finals at the 2014 BWF Badminton World championships held at the Ballerup Super Arena in Copenhagen. Photo: Jonat
Spain's Carolina Marin pulled off a monumental upset at the Badminton World Championships in Copenhagen as she beat Chinese world number one Li Xuerui to win the women's singles title on Sunday.
The 21-year-old ninth seed recovered from dropping the opening game to the top seed and Olympic champion to complete an incredible 17-21, 21-17, 21-18 victory and earn her country its first ever major title in the sport.
"I don't have any words…it was a fantastic match," said Marin. "She played amazing rallies in the first set and her strokes are so good. My coach told me if I wanted to win I had to fight until the end. I fought to the end, that's what I did. I feel so excited."
Malaysia's Lee comes up short again
On the men's side, China's Chen Long won the men's singles title on Sunday inflicting Malaysia's world number one Lee Chong Wei's third successive defeat in the final.
The 31-year-old Malaysian, whose last chance of winning the world title this may be, was beaten 21-19 21-19 by Long in Copenhagen.
Lee, a two-time Olympic silver medallist, had looked to be in prime position to at last win the elusive crown after his nemesis in the past two finals, another Chinese player, Lin Dan, was absent.
"I am not yet the world number one. I will take some rest and get ready for the Asian Games," said Chen.
Lee felt moved to apologise.
"I am sorry that I didn't win for my country," said Lee. "I tried my best but I made too many mistakes. But I shall go on."
Doubles titles
Earlier, China extended their dominance in women's doubles as Tian Qing and Zhao Yunlei claimed the country's 12th straight gold medal in the event by defeating compatriots Yu Yang and Wang Xiaoli 21-19, 21-15.
Meanwhile South Korea struck gold in the men's doubles as Ko Sung-hyun and Shin Baek-choel, the 12th seeds, beat fellow countrymen Lee Yong-dae and Yoo
Yeon-seong 22-20, 21-23, 21-18.