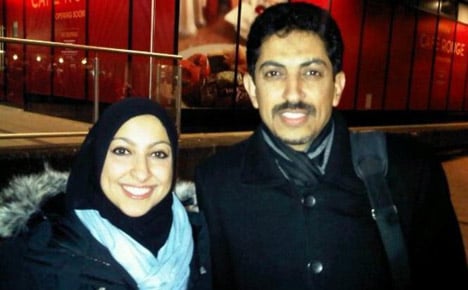 Maryam and Abdulhadi al-Khawaja. Photo: Maryam al-Khawaja/Polfoto
Abdulhadi al-Khawaja, the jailed Danish-Bahraini activist who began a new hunger strike on Monday, is in a coma according to a report from Politiken.
An activist with Al-Khawaja’s Bahrain Center for Human Rights said that the dual Danish and Bahraini citizen fell ill on Thursday and was taken to the prison hospital, where he was reported to be in a coma.
Al-Khawaja’s family announced on Monday that he would begin a new hunger strike, refusing all food and drink with the exception of water. An earlier hunger strike by the activist lasted 110 days and led to a massive, but unsuccessful, diplomatic effort by Denmark to get him either released or transferred.
See also: Jailed Dane begins new hunger strike in Bahrain
Al-Khawaja, a dual citizen of Denmark and Bahrain, has been imprisoned in Bahrain prison since 2011, serving a life sentence for demonstrating against the government and organising protests during the Arab Spring. Along with eight others, he was convicted on charges of terrorism and attempting to overthrow the government. While jailed in Bahrain, al-Khawaja has been subjected to torture, violence and sexual abuse. In January 2013, al-Khawaja lost the final legal appeal against his life sentence.
Al-Khawaja’s daughter Maryam wrote on Twitter that the activist’s other daughter Zainab was detained by Bahraini police on Thursday when she tried to visit their father in prison. Zainab is seven months pregnant. Both of Al-Khawaja's daughters are also Danish citizens.
According to Politiken, the family will appeal to the Danish Foreign Ministry for help. A doctor has told the family that al-Khawaja's hunger strike may have already damaged his internal organs.