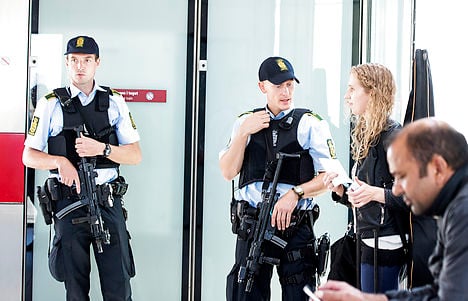 Police responded to the report of a suspicious man aboard a train in Copenhagen. Photo: Claus Bech/Scanpix
A 21-year-old University of Copenhagen student set off a city-wide manhunt involving police officers armed with machine guns on Thursday.
Shortly after 8.30am, police began a search for a man who was reported as behaving suspiciously on an S-train. The man was allegedly reading a book on terror and acting strangely. He then made a hasty exit from the train at Nørreport Station, Denmark’s busiest transport hub, before transferring to the Metro and getting off at Islands Brygge Station.
Police quickly responded to a tip-off from a fellow train passenger and descended upon Nørreport. A subsequent search for the man extended throughout the city, including police sweeps of Copenhagen Airport and Christiansborg.
See also: Copenhagen police look for 'suspicious' man
But at an afternoon press briefing, police announced that they had identified and contacted the man and that he was “completely clean”.
“This morning we received a report about a young man who boarded at Avedøre Station. The man appeared to be very nervous. Because we found the report to be trustworthy, we determined it was necessary to find the man in question,” Copenhagen Police inspector Mogens Lauridsen said.
During their search, police released several photos of the man and asked for the public’s help in identifying him. According to police, it was a tip-off from the man’s family that led to his identification.
“It was apparently someone who had been very nervous because he had to take an exam,” Lauridsen said.
TV2 News caught up with the man following the police press briefing and he explained his “suspicious” behaviour.
“I was going to an exam and I sat in the train reading a book on 9/11 and I was very nervous. I noticed that a woman was looking at me, so I tried to smile to her. But then I ended up knocking my bag over and then my printer fell out with a whole bunch of cables,” Alisiv Ceran, 21, told TV2.
Ceran said he studies English at the University of Copenhagen and that his exam was on the war against terror as part of a course in American foreign policy.
At the same time police were looking for the man, they had to deal with a report of a mysterious suitcase that was found near Kongens Nytorv. Officers barricaded the area for approximately 45 minutes before discovering that the suitcase did not contain anything suspicious. They found the owner and called off the alarm.