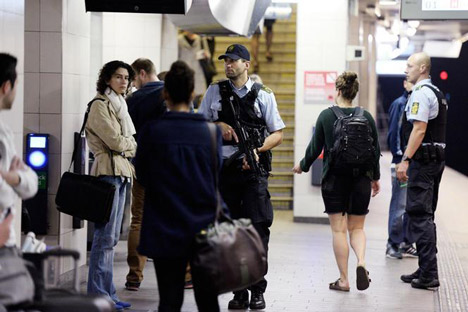 There is a heavy police presence in several areas of Copenhagen as officers search for a man who behaved strangely at Nørreport Station, Denmark's busiest transport hub.

Police released a photo of the 'suspicious' man via Twitter and are asking the public to contact them with any information on his whereabouts.

Police have been looking for the man at various locations in Copenhagen since around 8.30am on Thursday. They have not released any details on what led to the search.

"We will not elaborate on what the suspicious behaviour entailed. The most important is that we are looking for the man in question," police said on Twitter shortly after 12pm.

A report from Ekstra Bladet says that passengers on an S-train alerted police after spotting the man reading a book on terror and acting nervously. According to Ekstra Bladet, the passengers said that the man "nearly panicked" when his black suitcase fell over, after which he hastily gathered his things and got off the train at Nørreport Station at 8.29am.

Police have not confirmed this version of events.

Shortly after 1.30pm police inspector Mogens Lauridsen gave an update to the situation.

"We do not have indications that a concrete threat against Copenhagen or Copenhageners exists," he said via Twitter.

Police have released three additional photos of the man, which were captured by surveillance cameras on the Metro. The man is reported to have gotten off the Metro at Islands Brygge Station shortly after 8.30am.

According to reports, police have searched several areas in and around the city, including Copenhagen Airport, the parliament building Christiansborg and DR Byen in Amager. Ekstra Bladet has an interactive map showing where police have searched, when can be viewed here.

Anyone with information is requested to contact Copenhagen Police on 114.

As police continued to search for the man, they also responded to reports of a mysterious suitcase left behind near Kongens Nytorv in central Copenhagen. That area was closed off for approximately 45 minutes while police investigated. The suitcase was found to be harmless and the owner was located. It was not connected to the ongoing search.
Police will give a press briefing at 2.15pm.