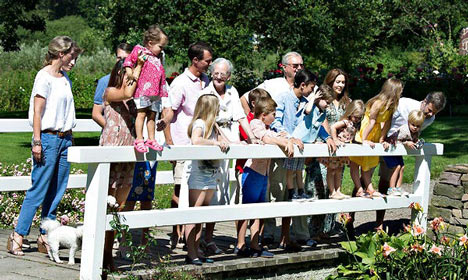 The royals at their press appearance at Gråsten Palace in July. Photo: Henning Bagger/Scanpix
The government’s budget proposal released on Tuesday includes an 8.7 million kroner ($1.54 million) annual boost for the Royal House.
In an effort to make up for years of the royals costing more than what parliament has set aside for them, an adjustment has been made to tie the royals’ costs to a different price index.
The change will result in 79 million kroner ($14 million) to Queen Margrethe next year, a 6.7 million kroner increase over what she received in 2014. The rest of the the royals will also receive increases totaling 26.8 million kroner, putting the total budget expenditures on the Royal House at 105.8 million kroner ($18.7 million) for 2015.
By tying the royals’ costs to a salary and price index different from what the annual budget uses to extrapolate costs, Metroxpress reports that since 2009 the royals have received 22.4 million kroner more in public funds than planned.
In addition to Queen Margrethe’s 79 million kroner, Crown Prince Frederik will receive 19.5 million, 1.9 million of which he has to give to his wife Mary. Prince Joachim will be supported to the tune of 3.4 million kroner, while his former wife Alexandra – who a majority of Danes want to cut off from the public trough – will receive 2.3 million kroner.