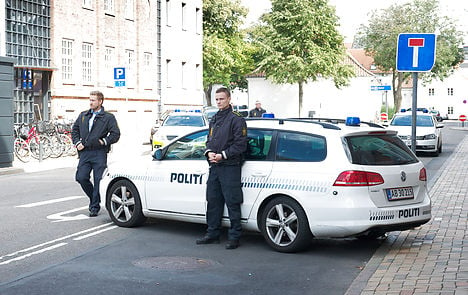 Danish police do not wear identification so cameras could help clear up complaint cases. Photo: Sonny Munk Carlsen/Scanpix
Based on success in the US and England, there is a growing interest in outfitting Danish police officers with miniature cameras to record their interactions with the public.
Kirsten Dyrman, the head of the Independent Police Complaints Authority (Den Uafhængige Politiklagemyndighed – DUP), told Information that the technology is “incredibly exciting” and would be of great help to her organisation, which investigates residents’ complaints against the police.
“A whole lot of our cases today are one person’s word against another’s, so we end up in a grey zone. But when we have video recordings, for example from a mobile phone, we can often make crystal-clear decisions. It builds up trust in the police and trust among residents who complain,” she told Information.
In 2013, DUP took on 418 cases. In 58 percent of those, investigations were ceased due to a lack of evidence and charges were filed against a police officer just 12 times.
In many cases, charges are dropped because the individual officers involved cannot be identified. Danish police officers do not wear name badges or ID numbers, and despite numerous calls to make officers easier to identify, the National Police (Rigspolitiet) and the Justice Ministry have thus far resisted an identification system for police officers.
Both Rigspolitiet and the Danish Police Union (Politiforbundet) are also sceptical about requiring officers to wear video cameras.
“The question is whether the benefits would equal the resources it would require to invest in such a system. I absolutely won’t deny that it is something we should look at, but it isn’t something we have current plans to do,” Rigspoltiet’s Svend Larsen told Information.
Claus Oxfeldt, the chairman of Politiforbundet, also pointed to costs and added that he thought the interest in police cameras represented a “strange development of distrust of public employees”.
“Why not also film all doctor consultations, caseworkers while they work, all daycare workers that watch our children, all teachers, and so on?” he asked when speaking to Ritzau.
In the American town of Rialto, California, police have been wearing $900 (5,090 kroner) cameras since 2012. Within a year of implementation, the number of complaints against police officers dropped by 88 percent and police use of force declined by 59 percent.
“When you put a camera on a police officer, they tend to behave a little better, follow the rules a little better. And if a citizen knows the officer is wearing a camera, chances are the citizen will behave a little better,” Rialto Police Chief William Farrar told the New York Times.
American police officers responding to the unrest following the shooting death of Michael Brown in Ferguson, Missouri were also outfitted with cameras and some districts in London have also begun experimenting with camera-equipped officers.
Despite the police scepticism, the use of police cameras has generated significant political interest. Representatives of the Socialist People’s Party, the Conservatives, the Red-Green Alliance (Enhedslisten), and the Danish People’s Party (DF) all told Information that they supported the idea, and Enhedslisten and DF called for a trial programme in one of Denmark’s 12 police districts.