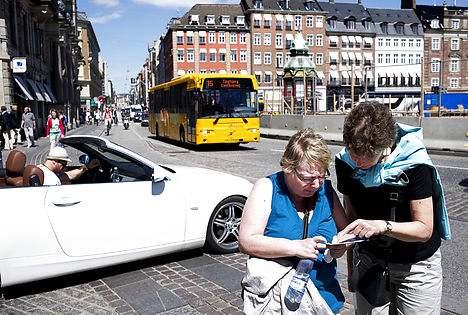 Photo: Claus Bech/Scanpix
For four years running, the number of Russian tourists coming to see The Little Mermaid and Tivoli has been on a steady incline.
But through the first six months of 2014, as tensions mounted between Russia and the West, that growth stalled.
According to Metroxpress, Russian tourists had 56,105 overnight stays in Denmark in the first half of 2014. While that is a one percent increase over the same period last year, it is a significant flattening of the upward trajectory seen in recent years.
In the first half of 2013, 16 percent more Russians visited Denmark than in the same period in 2012, while that year saw a whopping 38 percent increase over the same period the year before.
Lise Lyck, a professor of tourism at the Copenhagen Business School, said the flatline was bad news for the tourism industry because Russians are generally seen as big spenders.
“It’s sad but there isn’t much to do about it. It would be a waste of money to increase the marketing of Denmark to Russia as the situation stands nows,” she told Metroxpress.
Tourist organisation VisitDenmark said that it’s not just Denmark that is seeing a decrease in Russian tourists.
“The general uncertainty surrounding Russians’ personal finances and the weak rates on the ruble have meant that all of Europe has seen a slowdown in Russian tourism. But we will continue to educate people in the Russian travel industry so that they are better at selling trips to Denmark,” VisitDenmark spokesman Flemming Bruhn told Metroxpress.