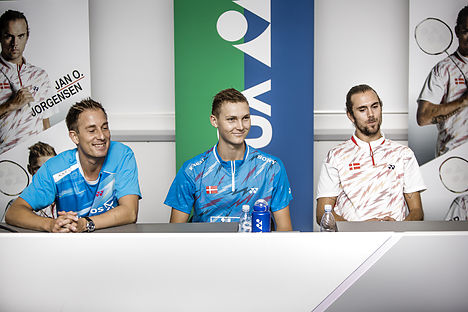 Peter Gade, Viktor Axelsen and Jan Ø Jørgensen. Photo: Thomas Lekfeldt/Scanpix
Danish third seed Jan Ø Jørgensen will have no shortage of support as he tries to become the first European to win the Badminton World Cup since compatriot Peter Rasmussen triumphed in 1997.
Standing in his way will at Ballerup Super Arena in suburban Copenhagen be world number one Lee Chong Wei, who hopes to capitalise on the absence of leading rival and five-time world champion Lin Dan of China as he pursues a first world championship crown.
Malaysia's Lee, runner-up to Lin at the past two world events as well the 2008 and 2012 Olympic Games, will have the chance to emerge from the shadow of his Chinese counterpart who failed to qualify after taking an eight-month sabbatical following last year's showdown with Lee in Guangzhou.
However, the Malaysian shuttler's preparations have been far from smooth after Lee was forced out of the Commonwealth Games in Glasgow with an ongoing thigh problem.
Unable to defend his titles from 2006 and 2010, Lee lost his Commonwealth crown in Glasgow to India's Kashyap Parupalli, who is a likely second-round opponent for the top seed in Denmark.
First though Lee must navigate his way past South Korea's 32nd-ranked Lee Dong-keun in the opening round, his first match since losing in the semi-finals of June's Indonesian Open.
"I have not played in a competitive match for nearly two months, so my first-round match will be very important. I hope to make a good start," Lee, 31, was quoted as saying by Malaysian media.
Chen carrying Chinese hopes
China's Chen Long is viewed as the greatest threat to Lee's title ambitions but it's largely been a year to forget for the second seed.
The 25-year-old Chen is without a title since seeing off Lee in the final of January's Korea Open and faces further pressure following the withdrawal of compatriot and 2013 world bronze medallist Du Pengyu on top of Lin's non-participation.
"With Lin Dan not playing in the world championships, the Chinese will surely be banking on Chen Long to deliver," said Lee's coach Rashid Sidek, who was given the green light to travel to Copenhagen with his protege after resolving a dispute with the Malaysian federation having initially been excluded.
"I'm not sure of his latest conditions. But with him not playing well since the Thomas Cup, you can expect the Chinese coaching department to make some adjustment to his training regime to strengthen his game. China will go all out to defend the men's singles title," added Rashid.
Chen's route to the final was made easier after Kenichi Tago, the Japanese fourth seed, was forced out last week through injury.
With Tago sidelined, the main challengers for the 2012 Olympic bronze medallist will be Indonesia's Tommy Sugiarto, Son Wan-ho of South Korea and Hong Kong's Hu Yun.
Jørgensen beat Chen on his way to the Indonesian Open title and, like his Chinese rival, has seen his quarter of the draw open up with Indonesia's Simon Santoso, the eighth seed, pulling out after contracting dengue fever.
The Dane, joined in the draw by seeded compatriots Hans-Kristian Vittinghus and Viktor Axelsen, is on course for a semi-final showdown with Lee who has defeated Jørgensen in 12 of 13 previous meetings.
The women's draw is headed by Chinese top seed and Olympic champion Li Xuerui who will aim to go one better than her silver medal at last year's championships where she was defeated by Thailand's Ratchanko Intanon, the fourth seed in Copenhagen. Li's fellow countrywomen Wang Shixian and Wang Yihan, the 2011 world champion, are seeded second and third respectively with London Olympic bronze medallist Saina Nehwal of India occupying the seventh spot.