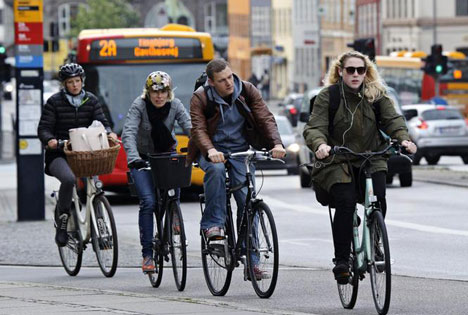 The new bridge should cut down on the bike traffic over Knippelsbro (pictured). Photo: Jens Dresling/Polfoto
Before the drool has even dried on the chin of the international press over Copenhagen’s cycling bridge Cykelslangen (see some examples here, here and here), capital city cyclists can already look forward to a new bridge.
A cyclist and pedestrian bridge will cross Copenhagen Harbour alongside Langebro by 2018, city officials announced on Friday. The bridge has been under discussion for years but will now become reality thanks to financial support from Realdania.
The bridge will be placed where the original Langebro crossed the harbour from the end of the 1600s to the beginning of the 20th century.
City officials said the new route would be another feather in the cap for the city of cyclists. The new cycling bridge will run alongside Langebro. Photo: Københavns Kommune
“Today when cyclists cross the harbour, they either need to use the vehicle-filled Langebro or deal with the congestion on the bike paths over Knippelsbro. Now cyclists will get yet another cycling bridge, which will also make it possible for them to exchange the car-filled H.C. Andersens Boulevard for Vester Voldgade, which buzzes with life rather than the noise of cars,” Morten Kabell, the city’s deputy mayor for the environment, said.
The city’s mayor, Frank Jensen, said the new bridge would relieve congestion for all.
“We need to ensure that Copenhagen is a good city to move around in. Therefore we are well underway in connecting the city with more Metro lines and more bridges over the harbour so that daily life in Copenhagen functions better,” Jensen said.
Copenhagen currently has four cycling and pedestrian bridges in the works. Another key project for improving cycling infrastructure is a planned route through the heart of the freetown Christiania. That project has faced extensive delays due to protests and threats from Christiania residents, who fear that the cycling connection will lead to too much – and too fast – bike traffic through the commune.